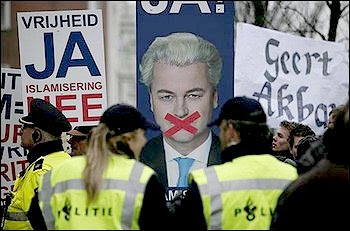 Our Flemish correspondent VH has translated an article about a demonstration supporting Geert Wilders that was held in front of the court building today in Amsterdam:

Wilders supporters in front of the Amsterdam Court

They carry signs and banners with texts like “freedom of speech”, “support Geert”, “our freedom ritually slaughtered” and “a critique of ideology is not sowing hatred”.

Wilders arrived just before half past eight at the court in Amsterdam. At that time three cars arrived with flashing lights and sirens. Wilders himself could not be seen.

The security measures both inside and outside the court are very strict. The court prior to the hearing of the case was searched with dogs. In the courtroom a video room has been equipped for about one hundred people who want to follow the case. 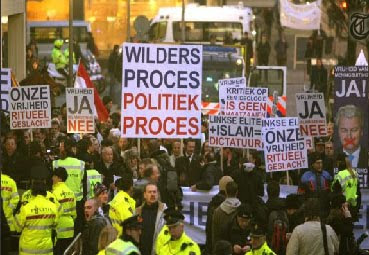 One of the estimated three hundred demonstrators became unwell and had to be brought to hospital in an ambulance. The tension and the cold, according to her friend, had proved to be a bad combination.

Among those in the crowd arriving from far and near togetherness reigns. They speak of collective shame that the PVV leader must be on trial, while he simply speaks the truth.

Bagels and Beans shop, just outside the police cordon, was doing big business. Wilders’ sympathizers got together there for a coffee. What is striking is that they stick to the topics: the political process, freedom of expression, the problems caused by Islam.

For the occasion, LPF-man [List Pim Fortuyn, the former party of Pim Fortuyn] Peter Stolker from Schiedam [near Rotterdam] handed out a leaflet to anyone who wanted to read it. The text is about the hatred he saw in the eyes of a group of Palestinian demonstrators in 2002, in Rotterdam. And right now it is Geert Wilders has to stand trial for sowing hatred. The world upside down, according to Stolker.

One thought on “Geert Akhbar!”