This post is dedicated to the Okie Lurker, riven as he is with confusion…

A bit of history from my favorite “Economics for Fun” blog, The Conspiracy to Keep You Poor and Stupid: 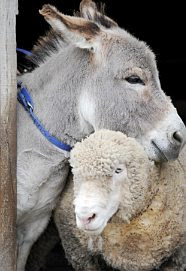 THE YEAR IS 1947… Some of you will recall that on July 8, 1947, a little over 60 years ago, witnesses claim that an unidentified flying object (UFO) with five aliens aboard crashed onto a sheep and mule ranch just outside Roswell, New Mexico. This is a well known incident that many say has long been covered up by the U.S. Air Force and other federal agencies and organizations.

However, what you may NOT know is that in the month of April 1948, nine months after that historic day, the following people were born:

See what happens when aliens breed with sheep and jackasses?

The man has just explained the whole phenomenon of all those people who came of age in the 60s and made such a royal muck of things. I knew it! Surely, I thought, there is a simple answer out there for such a huge evil.

Alas, these creatures are still with us for a while yet and then they will fade…unless…unless…what if the UFO comes back? Ah, no…pity the poor sheep and jackasses.

Of course, there is always the other side of the story. Boring.