Our Austrian correspondent AMT has translated an article from the print edition of Die Kronenzeitung (January 7, 2010, page 12) about yet another victimized Muslim immigrant: 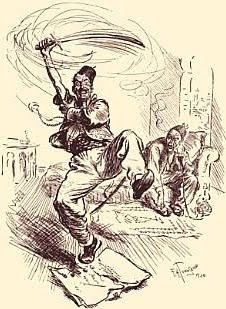 What happens to a presumed thief, carrying a wallet that doe not belong to him, who is held by police? Correct: He is allowed to keep the money and smash the police car, as happened at the Praterstern (Vienna). Why was there no arrest? Reason: The “indignation” was justified.

The story seems complicated, yet it is simply absurd. A Tunisian man (22) is unable to pay his bill at a kebab stand. Police search him and find a wallet not belonging to him with sixty euros and credit cards not issued to the suspect, who says, “I found the wallet.” Adding: “But the sixty euros are mine!”

Now the story gets bizarre:

Because the policemen do not want to return the banknotes, the man goes berserk, demolishes the police car, slashes the seat covers, and smashes the windows. Surprising reaction from the public prosecutor’s office: “Justifiable indignation.” The sixty euros are returned to the Tunisian, and he is a free man.

Reaction from David Lasar, FPÖ security spokesman: “The Tunisian man destroyed the police car, smashed the windows, slashed the seats. And now he is let go — with the money! As long as the prosecutor’s office makes these kinds of decisions, the difficult task of the police force resembles that of Sisyphus.”