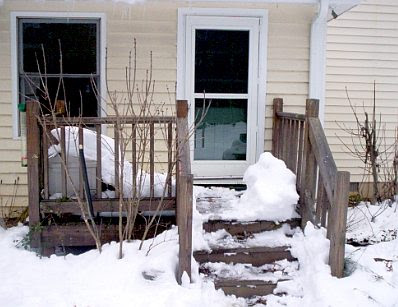 Do you think this counts as a white Christmas?

We were snowed in for five days, until this past Tuesday. Although our driveway has been scraped, getting the car in and out remains an adventure, and the turnaround space is so narrow that the car has gotten stuck on several occasions, each time having to be dug out afresh.

For those of you who were raised in an urban environment, “scraping” is distinct from “plowing”. Scraping is accomplished using a blade on the back of a farm tractor, as opposed to plowing, which uses a blade on the front of a pickup truck, or a special plowing vehicle. In addition, strictly speaking it is our road which was scraped, and not our driveway. In Central Virginia the word “road” signifies more than just an official state-designated thoroughfare; it covers any lengthy right-of-way, especially if it is used by more than one residence. The word “driveway” is reserved for those little bits of asphalted parking spaces that suburban dwellers have next to their houses.

When I first moved out here, I ran afoul of this unfamiliar terminology. That first winter, after a hard snow, I phoned the house of the man who scrapes roads. His wife said that he wasn’t home just then.

“Is he out plowing people’s driveways?” I asked.

“No, he’s out scraping people’s roads,” she replied.

This sounds stupid or trivial, but it isn’t — these are important practical distinctions to the country people around here. It was part of a whole new vocabulary I had to learn after I emigrated from the Wretched Hive of Scum and Villainy, a.k.a. Northern Virginia.

Dymphna and I realized about a week ago that for all practical purposes this was going to be the Year Without a Christmas. As most of you know, illness left a huge smoking crater in our late autumn. The future Baron’s swine flu — and Dymphna’s and my own simultaneous illnesses — sucked up a month of our lives. When we finally emerged from the fog of ill health, Christmas was hard upon us with no time to prepare, either mentally or practically.

Then the good Lord — who always enjoys a little joke — dumped fifteen inches of climate change on us during what would otherwise have been the most frantic prodromal phase of the Christmas season.

So we just decided to relax and enjoy a modest little reduced-calorie Christmas celebration. Christmas Eve service, eggnog, a bit of music, and a celebration of the fact that all three of us survived the month of November — what more could anyone want?

For a while there it was touch and go with our son. We are deeply grateful that he is alive, because there were a few tense days towards the end of November when we weren’t so sure he would make it. Now he is back in Blacksburg, unemployed but not coughing. Last night he sang excerpts from Handel’s Messiah in the choir at his church’s Christmas Eve service.

How could we not be thankful and ready to celebrate this Christmas?

Out at the end of our road, fronting on the county road, is the house of our neighbor Annie. I always refer to her as our next-door neighbor, even though her house is about a third of a mile (500-600 m.) away from us through the woods.

Last Saturday, on the second day of the blizzard, Annie ventured out into the snow, possibly to feed her dogs. Nobody knows exactly what happened, but while she was outside she fell down in the snow. A little while later her nephew from across the road found her there, still alive, and carried her into his house.
– – – – – – – – –
One of her brothers — the same man who scrapes our road — used his tractor to clear a path for the rescue squad to get in. The ambulance arrived and took Annie to the hospital, but it was too late. Annie was in her late seventies, and the hypothermia was evidently too much for her body, so she died.

Annie was a black woman, one of eleven children, eight of whom are still alive. In the second, third, and fourth generations the family becomes uncountably numerous, and all of them seem to be gathering now in preparation for the funeral on Monday. When we went out last night there were four unfamiliar cars parked in front of Annie’s house, and the entire clan is presumably celebrating a somewhat somber Christmas today.

Annie was one of the younger children, and by the time she reached adolescence, the family was in difficult financial circumstances. Just after the war, when she turned thirteen, she was sent off to Richmond to work in a hospital for white people, cleaning cribs in the nursery. When she was older she moved to New York, got married, raised a family, and continued working.

About fifteen years ago, after retiring and being widowed, she moved back home. She built a small brick house just across the road from the “Big House”, the old frame place where she and her siblings were raised. There she acquired a lot of dogs and lived out the rest of her days.

Annie was not always quite right in the head. The last time I spoke to her she was standing in her front yard, looking anxiously across the road at the field. She told me that three horses had just come out of the woods, run across the road, and jumped the fence into the field. It was a very strange story, because no one anywhere near us owns any horses. Annie was about two-thirds blind, and chances are those were deer she saw running out of the woods and leaping the fence — there are thousands of deer around here.

Annie also drank, which explained some of her strange little quirks. Drink may have been a factor in her death — it’s hard to imagine that she was sitting out a blizzard without taking an occasional nip from the bottle. At some point the dogs may have barked, and she went out into the snowdrifts to tend to them, all the while none too steady on her feet…

Annie was a difficult person, but not a bad one. I will miss her. I’d like to think that she was so anesthetized by alcohol that when she fell down in the snow, it only felt cold for the first few moments. After that she would have been comfortable and drowsy, enveloped in a soft insulating blanket of whiteness.

At least that’s the way we all hope it was.

Merry Christmas, everybody. Gather close around you all those you care about. We’re only here for a little while.

11 thoughts on “The Year Without a Christmas”