It’s hard to blog when you’re on drugs. Amend that: the blogging is easy. Making sense is difficult. With this proviso in mind, let me say I sat down to assemble some prefatory notes on two subjects I’ve been thinking about: Tiger Woods’ unfortunate run-in with his wife was the first topic, and the second was…was…umm…the second one had disappeared into the fog of misfiring neurons.

I looked on Memeorandum; surely someone would be posting on the lost idea and seeing the category would bring the contents of my subject floating up to the top like a message inside an eight ball. Nope. Nada.

Nothing on offer gave off the pheromone warning; there was no sudden ah-ha! “I-was-going-to-post-on-that” feel to any of the stories.

I noticed they were still carrying the Charles Johnson manifesto from the other day. Wasn’t that fish wrap by now? Then I saw one of the lede captions went directly to Jules Crittenden’s post. I like Crittenden’s style. He’s succinct, a witty writer. 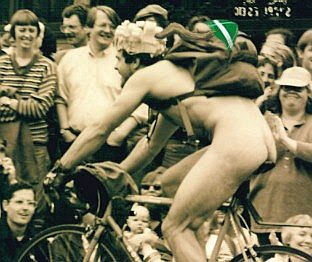 Titling his take on the matter “Charles Johnson Explains The Crazy Hating” was cleverly ambiguous. You’re left wondering who was expending the energy on crazed vitriol. Was it Chazzer slinging mud from his high dudgeon or had one of his numerous victims/enemies decided to go after him? And that is Mr. Crittenden’s intention – to leave you wondering – as Chazzer’s readers are often left when he goes predictably postal over whatever latest outrage has him spittering into the dark.

I would have preferred a detailed description of the moment when all that inclusive thoughtful concern hit him like a silver bullet, when the switch flipped on the bright shining light on the road to Damascus, when … enveloped by its warm, mentally balanced, nurturing embrace … he started frothing about the hateful craziness. Also, how the crazy hating on his new side of the aisle fits into his new anti-hate/crazy world view.

Now is that adept or what? Better footwork than Fred Astaire. And notice the nudge about the road to Damascus. Just a sprinkle of Biblical metaphor to get CJ’s juices flowing.

Speaking of metaphors, earlier today the Baron pointed something out about Chaz. I had noted back in 2007, when he first went off the track, that he’d begun using smell metaphors when he was sounding particularly regressed. If you have the time or interest I suppose you could dig through the late 2007 threads when he began expressing disgust by referring to his olfactory nerves. Things smelled bad or good. And now it seemed he was back to his bloodhound tricks.

This example today was an attack on some ad which ran in the paper. CJ complains about the noxious smell emanating from this ad. Originally I’d planned to just use his nose, but if you read the whole passage, you can observe both his deep sense of persecution and how invaded he feels. This is the full quote the Baron sent me:

The racism at the Washington Times (former employer of white supremacist blogger Robert Stacy McCain) is bubbling to the surface for all to smell, like noxious sewer gas. Today they ran the following advertisement, a lunatic Birther ad featuring images of monkeys. This isn’t even “dog whistle” racism. It’s right in your face, poking you in the eye.

This is fascinating. His sense of smell is assaulted, even his eyes are in danger of being “poked”. I tell you, Charles is a walking, talking (and biking) Freudian slip (if you want to read the whole thing, Google is your friend. I don’t link to his site anymore).

Sometimes when I see this Icarus figure lying in the withered grass, staring sightlessly at the stars, I wonder if his fall could have been avoided. At other times I simply don’t give a fig beyond wondering how much farther he has to go before he’s finally finished falling.

I guess that point will be when Memeorandum says, “Charles Who?” “Little Green What?”

25 thoughts on “Maybe His Wings Melted?”