There are many heroes in the Counterjihad movement, and it’s important that we celebrate them.

Some of our heroes are members of the military in various countries, and others are in the police and intelligence services. These people put their lives on the line all the time, and often receive scant appreciation from their governments for their selflessness. In addition to the deadly perils of their jobs, when the winds of ideological fashion shift they are frequently used as political footballs by their superiors.

There are also numerous people who wear no uniform and yet act heroically in the struggle against the Great Jihad. They don’t necessarily bear arms or put their lives on the line, but they are heroes nonetheless.

So what makes an ordinary citizen a hero of the Counterjihad?

First of all, he faces some kind of serious risk by doing what he does. He might be in danger of losing his job, or risk possible arrest, or surrender his own financial well-being for the sake of the cause. The consequences of his actions may include a brick through his living room window or having his car overturned and set on fire. In the most extreme cases he faces bodily harm or even death because of what he chooses to do.

Most importantly, he does not back down in the face of threats and intimidation. It would be so easy and forgivable to retire from the fight and return to the quiet life, yet he persists. A “hate speech” charge or a death threat only serves to make him more resolute in his resistance to Islamization. He serves as a shining example for the rest of us, reminding us of the stark choice between principled behavior and moral cowardice.

What we really need is a Counterjihad Heroes’ Gallery which would recognize and memorialize those who have taken serious risks and made major sacrifices for the sake of the anti-jihad cause. I don’t have the time or resources to add this job to my to-do list, but perhaps someone with web programming skills and access to a secure server could take the idea and run with it.

There are many candidates for our heroes’ gallery, but I’ll pick just three to get the ball rolling. Readers are invited to include their own choices in the comments.

Oriana Fallaci, the late author of The Rage and the Pride and The Force of Reason, is justly celebrated for her many writings that warned of the dangers of Islam. Her body of work was already an inspiration for the rank-and-file of the Counterjihad, but it was her actions during the last few years of her life that made her into a hero.

She was in the midst of a grim struggle against terminal cancer when the Italian government put her on trial for “defaming Islam”. With only a few more months left to live, she could have settled her case by doing the normal cowardly things that most people would do in a similar situation: apologizing, expressing contrition, agreeing to donate money to “outreach” groups, pleading guilty to a lesser charge and paying a fine, and so on.

She could have opted to end her life in quiet and uneventful obscurity. Instead she chose to fight the charge vigorously, and remained an outspoken opponent of Islamization until the day of her death.

Oriana Fallaci was a hero. 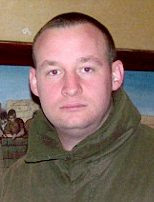 Paul Ray, the British blogger who posts under the pseudonym Lionheart, has been living under severe threat for several years. He ran afoul of the corrupt police force in his native Luton when he attempted to expose the Pakistani drug-dealing gangs who terrorized his neighborhood. His life was threatened, and he was driven out of his home and business.

Lionheart could have opted to save his skin by shutting up and moving someplace where he would no longer be a thorn in the sides of the South Asian drug dealers. But his Christian faith impelled him to stay and continue his efforts to expose and publicize what was happening in Luton. For his trouble he was publicly denigrated, called a racist and a neo-Nazi, and demonized in the press.
– – – – – – – – –
The climax came when the police charged him with “incitement to hatred” after receiving a complaint from a Pakistani about the “racist” writings on his blog. For the following year they kept him hanging, using the charge to remind him of his powerlessness in the face of the corrupt multicultural regime that now controls the UK. The police have effectively told him that they can’t protect him, although they are conscientious enough to notify him whenever they receive a credible threat against his life.

Lionheart is a hero.

Fabrizio Quattrocchi was an Italian security guard who was taken hostage in 2004 by Islamic terrorists in Iraq. Like so many other infidels who were taken hostage in those days, he faced a grisly death at the hands of his captors. The customary practice was to force the hostage to kneel and be beheaded while videotaping the gruesome process.

Mr. Quattrocchi could have done what so many other victims did. He could have whimpered and begged to be spared. He could even have tried to save his life by reciting the shahada and converting to Islam, as did one journalist who was captured by terrorists in the Gaza strip.

He was facing certain death, and he knew it. The only thing that remained under his control was the manner of his dying.

Fabrizio Quattrocchi chose to set an example for the rest of us, and not go meekly like a sheep to the slaughter. As his captors prepared to videotape his murder, they forced him to dig his own grave and kneel beside it while wearing the hood. He defied them by ripping off the hood and shouting “Vi faccio vedere come muore un italiano!” — “I’ll show you how an Italian dies!” Then the terrorists shot him to death.

Fabrizio Quattrocchi was a hero.

There are many other heroes who could be named here, some of them famous — such as Geert Wilders — and others anonymous and obscure.

If we lived in a sane society, there would be an annual day on which we celebrated them. It would be marked on all our official calendars: “Heroes of the Counterjihad Day”.

Or perhaps it would be April 14: “Fabrizio Quattrocchi Day”.

Thanks to Henrik from Europe News, who came up with the idea for this post.

13 thoughts on “Heroes of the Counterjihad”