The aggressive secularization of Western cultures continues apace, and overt expressions of Christian belief are the primary targets of PC governmental restrictions. The Netherlands is no exception to this, and the multicultural brigades of Dutch diversity are busy beavering away at the last vestiges of Christianity in Holland.

Our Flemish correspondent VH has translated a couple of articles on the topic. First, from De Dagelijkse Standaard:

“This cannot be allowed, confessing your religion this way.” 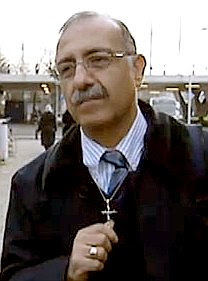 The Amsterdam public transport company (GVB) may demand that an employee not wear a visible chain (with a Christian cross). That is what the D66-Judges* of the Amsterdam Court have determined today. We are assuredly not a Christian country, they must have thought. An employee (an Egyptian immigrant) found it discriminatory that he is not allowed to wear his necklace with a Christian cross, while the GVB staff are allowed to wear an Islamic headscarf. The employee filed a summary procedure because he felt that the GVB treats religions unequally.

The Court disagrees with the employee, as the GVB refers to a general dress code: no worker should wear visible chains. According to the Amsterdam court that a “reasonable ruling with regard to the required security measures and the desire of a uniform and professional appeal. Regardless of whether what the GVB does here is right, I know a solution to the employee’s problem.

For example, he may start wearing a cap that bears a Christian cross (that will be allowed though, GVB?), or he puts the cross on a little rope to his neck instead of a chain. Or he pins a Christian pin on his clothing. He should continue this until he, too, can express his religion, like Muslims, or he should demand that headscarves — which unlike a Christian cross, of course have a professional appeal — be prohibited by the GVB. This is also still possible.

* “D66-Judges,” a term used for weak Islamized leftist judges who think a criminal is a victim (and vice versa). D66 is the center-left anti-Wilders party.

School ‘too diverse’ for Christmas tree

Many students are outraged at the decision of the Hague College not to put a Christmas tree in the school this year. This is because the tree is associated too closely with the Christian feast. In the atrium there are now only some garlands and a few little lights. The school board wants to stress the “international character and diversity within the school” this way.

Traditionally there was always a meters-high tree in the hall. The Board believes that as of this year the practice will be discontinued, and would rather stress the “international character and diversity” in the Hague school, as the 20,000 students could read on the HHS website. The school instead opts for “light and warmth” that everyone may complete in his/her own way, according to the supervisor.

Soon after the publication of the HHS the discussion broke loose on the Internet. Many students do not agree with the measure and are angry. “Because a handful of religious zealots are offended by a tree with some lights and colored balls, the rest of the school community now has to suffer,” one student said. “Why do foreign students come here to the Netherlands? Exactly, because they want to experience a different culture. This way they might as well have stayed at home,” another student wrote.