To a commenter who asserted that the downfall of the white race will be required in payment for centuries of sin, Fjordman made this bracing response:

Susan: I’m not so sure you are white, but you are definitely a liberal, and a troll.

My ancestors struggled hard to survive in a cold and dark country where my people have lived since the end of the last Ice Age. It’s not my fault that Kurds, Arabs and Pakistanis are incapable of creating societies as good as the ones we have made. They have no business being here and we have every right to expel them.

This reminded me of the Men of the North: 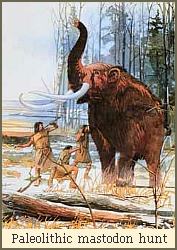 For the tens of thousands of years of the Würm glaciation, Paleolithic hunting tribes lived at the southern edge of the ice fields in Europe and Asia. About 10,000 years ago, as the last of the glaciers receded, some groups chose to follow the retreating ice northwards. While their cousins in the warmer regions to the south were smelting metal, these hardy tribes were knapping flint. While the southerners were inventing agriculture, slavery, and the ziggurat, the northerners were hunting large game in the chilly grasslands and forests of Central Asia and Northern Europe.

One such group arose in the steppes of Central Asia, shifting to the Neolithic era by taming the horse and other livestock. These folk lived a nomadic existence, migrating in all directions during the last several millennia before the birth of Christ. For want of a better term, they are known as “Indo-Europeans”, in reference to the language group their descendents propagated throughout the western half of Eurasia.

Some of the migrants turned south, invading, conquering, and taking up the ways of the city-states in the Indus Valley, Anatolia, and the Mediterranean basin. Other branches moved westwards and northwards, both in Europe and in Asia, displacing the indigenes and even opening up ice-free territory to humans for the first time.

Two major waves of Indo-Europeans migrated into Western and Northern Europe. Celtic tribes swept through Central Europe to take up residence in what is now Germany, France, the Low Countries, and the British Isles. Later Germanic tribes pressed on after the Celts, supplanting them in many places, moving northwards into Scandinavia and pushing the ancestors of the Lapps and the Finns further up the Baltic and into the Arctic.

The Men of the North built Western Civilization.

Those shrewd and hardy tribesmen hunted the mammoth and the auroch in the shadow of the glaciers. Later they eked a living from the stony ground and chill waters of northern Europe. They were a tough, industrious, and crafty bunch, those Men of the North.

The descendants of the tribes spread from the British Isles, the Low Countries, Jutland, Sealand, and the Scandinavian mainland across the surface of globe, conquering, settling, farming, trading, inventing, and building wherever they went.

They created what is now known as “the Civilized World”.

The contention that we must surrender all of this in penance for real or imagined past sins is a spurious assertion. It has no basis in law, morality, Christian ethics, or common sense.

We would do well to remember that.

12 thoughts on “Again, the Men of the North”