From Duke University, some refreshing news: 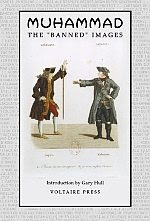 The Voltaire Press is issuing a book titled Muhammad: The “Banned” Images.

Last August, as you may recall, the weenie prestigious Yale University Press pulled the prayer rug out from under author Jytte Klausen, a Brandeis professor who’d written her own book on the subject of the Motoons. Dr. Klausen’s book is called The Cartoons That Shook the World. The Craven Press was okay with the book, but it decided to nix the pix. They claimed some anonymous panel of “experts” said that publishing the illustrations could instigate violence.

To which anyone still capable of thinking would reply, “Your point? When infidels breathe in and out it instigates violence. Just ask, oh, New York City, or anyone in Jerusalem. If you wish to avoid violence from Muslims, then lie down right now and stop breathing.” Or words to that effect. But then, anyone still capable of thinking wouldn’t volunteer to serve on some anonymous panel, expert or otherwise, to prohibit freedom of the press.

So the Klausen book won’t have cartoons — or any images of Mohammed and voila! the world is now peaceful. The two doofusses arrested in Chicago for planning to blow up Jyllands Posten? The news about Klausen’s book worked like a charm: not only did they decide not to bomb the newspaper, but they also figured out that Flemming Rose wasn’t such a bad guy after all, so they’re not going to assassinate him, either. Uh-huh.

And the Muslim dude who was shot in Detroit by the FBI? Mistaken identity. The victim was only making peace signs and friendship bracelets. He had been totally converted by the decision of the Yale University Press to omit those mean cartoons from Dr. Klausen’s book. The FBI said it was sorry for the mistake.

That psychiatrist at Fort Hood hadn’t heard about Yale’s decision so he went ahead with his massacre. I’m sure that if only someone had gotten the news to him in time… well, maybe not in his case. If lap dancing didn’t deter him, Yale’s anonymous panel probably couldn’t have either.

Now this new book, The Banned? Well, as it turns out their press couldn’t afford an anonymous expert panel to warn them about instigating violence. Heavens, when this book of cartoons gets out, Duke’s lacrosse team will be smiting necks and running amuck through the crowds of infidels. Heads will roll. Stomachs will hurl… oops, that’s just a normal Saturday night. Never mind.

The press release says that The Banned:

has thirty one “high-quality, full-color images of Muhammed. Complete with captions, the images span the 12th through 21st centuries, and include paintings by Muslim artists working in the Ottoman, Safavid, and Mughal empires, as well as paintings and drawings by William Blake, Gustave Dore, and Salvador Dali.

Dr. Hull, the professor of ethics who wrote the introduction, says it’s a “picture book”. He considers it a collection of errata to accompany Klausen’s book. The press release goes further:

It is of course more than that. It is a statement of defiance against censors, terror-mongers, and their Western appeasers. It is a rallying cry for free speech, freedom of the press, and for open scholarship unfettered by fear.” Hull has been involved with the Danish cartoon controversy since 2006, when his program at Duke hosted a speech by Flemming Rose. His introduction includes a brief survey of the reaction of Western intellectuals to Muslim violence and threats, including the Rushdie fatwa, the Theo van Gogh assassination, and Yale University Press’s recent spineless self-censorship.

NOTE: When you click on the Amazon link, you’ll see a message that they’re temporarily out of stock. Dr. Hull says in the review section that they have 4,000 copies ready to go, so just place your order. Now Amazon wouldn’t be pulling a p.c. move, would they? Maybe they have enough money to hire their own anonymous panel of experts who cautioned them to put up that notice?

What follows is the statement of principle from the Voltaire Press website, signed by writers, freedom foundations, and one harassed and hounded editor of a Danish newspaper.

Free Expression at Risk, at Yale and Elsewhere

A number of recent incidents suggest that our long-standing commitment to the free exchange of ideas is in peril of falling victim to a spreading fear of violence. Not only have exhibitions been closed and performances cancelled in response to real threats, but the mere possibility that someone, somewhere, might respond with violence has been advanced to justify suppressing words and images, as in the recent decision of Yale University to remove all images of Muhammad from Jytte Klausen’s book, The Cartoons that Shook the World.

Violence against those who create and disseminate controversial words and images is a staple of human history. But in the recent past, at least in Western liberal democracies, commitment to free speech has usually trumped fears of violence. Indeed, as late as 1989, Salman Rushdie’s Satanic Verses continued to be published, sold, and read in the face of a fatwa against its author and in the face of the murder and attempted murder of its translators and publishers. In 1998, the Manhattan Theater Club received threats protesting the production of Terrence McNally’s play Corpus Christi, on the ground that it was offensive to Catholics. After initially canceling the play, MTC reversed its decision in response to widespread concerns about free speech, and the play was performed without incident.

There are signs, however, that the commitment to free speech has become eroded by fears of violence. Historical events, especially the attacks of September 2001 and subsequent bombings in Madrid and London, have contributed to this process by bringing terrorist violence to the heart of liberal democracies. Other events, like the 2004 murder of Dutch film director Theo Van Gogh in apparent protest against his film Submission, and the threats against Hirsi Ali, who wrote the script and provided the voice-over for the film, demonstrated how vulnerable artists and intellectuals can be just for voicing controversial ideas. Under such threats, the resolve to uphold freedom of speech has proved to be lamentably weak: in the same year as Van Gogh’s murder, Behzti, a play written by a British Sikh playwright, was cancelled days after violence erupted among protesters in Birmingham, England on opening night.

In response to rising concerns about fear-induced self-censorship, in 2005 the Danish newspaper Jyllands-Posten published an article, “The Face of Muhammad,” which included twelve cartoon images. The cartoons became the focus of a series of violent political rallies in the Middle East in February 2006 and a subject of worldwide debate pitching free speech against “cultural sensitivity.”

For all the prominence of Islam in such debates, threats of violence against words and images are not the sole province of religious extremists. In 2005, a politically controversial professor’s scheduled speech at Hamilton College in Clinton, NY was cancelled in response to alleged threats of violence. In 2008, the San Francisco Art Institute closed a controversial video exhibition in response to threats of violence against faculty members by animal rights activists. Later that year, the University of Nebraska-Lincoln canceled a speech by former Weatherman and education theorist William Ayers, citing security concerns.

The possibility of giving offense and provoking violence has entered the imagination of curators, publishers and the public at large, generating more and more incidents of preemptive self-censorship: in 2006, for instance, London’s Whitechapel Gallery declared twelve works by Surrealist master Hans Bellmer too dangerous to exhibit because of fears that the sexual overtones would be offensive to the large Muslim population in the area; and publisher Random House canceled the 2008 publication of Sherry Jones’ The Jewel of Medina because “it could incite acts of violence.” The suppression of images in Jytte Klausen’s book is the latest, but not likely to be the last in the series of such incidents.

Words and images exist in complex socio-political contexts. Suppressing controversial expression cannot erase the underlying social tensions that create the conditions for violence to begin with, but it does create a climate that chills and eventually corrupts the fundamental values of liberal democracy.

A Call to Action

The incident at Yale provides an opportunity to re-examine our commitment to free expression. When an academic institution of such standing asserts the need to suppress scholarly work because of a theoretical possibility of violence somewhere in the world, it grants legitimacy to censorship and casts serious doubt on their, and our, commitment to freedom of expression in general, and academic freedom in particular.

The failure to stand up for free expression emboldens those who would attack and undermine it. It is time for colleges and universities in particular to exercise moral and intellectual leadership. It is incumbent on those responsible for the education of the next generation of leaders to stand up for certain basic principles: that the free exchange of ideas is essential to liberal democracy; that each person is entitled to hold and express his or her own views without fear of bodily harm; and that the suppression of ideas is a form of repression used by authoritarian regimes around the world to control and dehumanize their citizens and squelch opposition.

To paraphrase Ben Franklin, those who would give up essential liberty to purchase a little temporary safety, will get neither liberty nor safety.

[DISCLAIMER: The above signatories agree with the ideas expressed in the Statement of Principle. However, they were not involved in the creation of Muhammad: The “Banned” Images, and have no responsibility for its contents.]

4 thoughts on “The Motoons Have a Publisher. Riots to Follow.”