Below is the latest in an occasional series of essays from our British correspondent Seneca III.

By the Rivers of Babylon
On History, Blairism, and Obamania 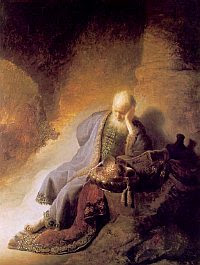 To the accompaniment of the buzzy, beguiling mantra “trust me”, the Messiah came unto us, his nimbus blinding all before him. Only in its now subdued light do we see the smoke and mirrors that deceived: Tony Blair’s time of basking in the adoration of the masses has drawn to its dismal close. The swarms of luvvies and literati who once rose moth-like to his flame may have arisen from the dead, but their recent plaintive rendition of “The King is in the altogether…” was a wail of contrition too little, too late. Had they but read classical history rather than their fan mail we might have been spared much of the devastation visited upon us.

Of the posturing youth Alcibiades, Plutarch reported: Once, when he had succeeded well in an oration he had made, and the whole assembly attended upon him to do him honour, Timon…said, “Go on boldly, my son, and increase in credit with the people, for thou wilt one day bring them calamities enough.”

Timon’s warning went unheeded. Athenian democracy fell to the mob, a fate in no small part initiated by the abiding hubris of Alcibiades.

Today, behind the ephemeral bread and circuses of Multiculturalism and Racism, New Labour is wreaking similar havoc. As the Dear Leader publicly buries the meaning of truth, his neo-Marxist recidivists are filling the graveyard of our culture.

There already lie sound primary, secondary and tertiary education, sacrificed on the altar of social engineering.
– – – – – – – – –
There lie our police forces, reduced to the status of social workers whilst law-abiding citizenry walk naked amongst predators.

There, also, the cadavers of our intelligence services — broken on the rack of spin — and the BBC, emasculated to the point of cringe.

No surprise, then, that freedom of speech lies nearby, suffocated beneath the midden of political correctness where lawyers and the bureautocracy wax fat.

And, stretching to the horizon, are yet more graves — graves that host the plundered husks of our pension funds, graves for the morale of our armed forces, and graves that await the inevitable victims of those alien belief systems that have been shuffled quietly through our gates. Step by stealthy step we are become the darkest dream of socialism.

By the rivers of Babylon, there we sat down, yea, we wept when we remembered Zion.

3 thoughts on “By the Rivers of Babylon”