Update: Rick at Brutally Honest has the famous CNN video and this comment from a reader:

“For the first time in my adult life…I’m PROUD of the International Olympic Committee!”

Evidently the first round, which eliminated Barack Obama Chicago as the site for the 2016 Olympic Games, was brief, if not merciful. 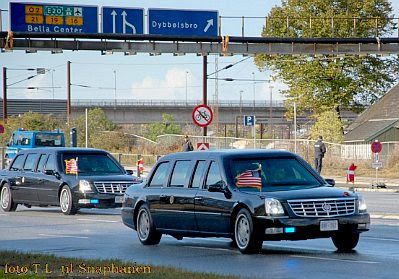 But the President was already flying home by the time the decision was made. This failure of his messianic charisma will be airbrushed out of his next autobiography, you betcha.

The New York Times put the news in the Sports Section, where it belongs:

Mr. Obama was the first American president to make an in-person appeal for a bid city and first lady Michelle Obama had also come earlier this week to lobby I.O.C. members for votes. Chicago’s bid leaders had worked for nearly four years and spent close to $50 million to bring the Summer Olympics to the United States for the first time in 20 years. Chicago had been considered among Olympic insiders as a favorite to win the Games, along with Rio.

So much for “insider” information. Why would a city with so many murders, such a reputation for graft and corruption carry the day? Chicago muscle doesn’t translate internationally.

Throngs watching the voting in downtown Chicago’s Daley Plaza gasped in disappointment as the announcement was made. It was the second straight time an American city fared poorly in the I.O.C. voting. New York’s bid was eliminated in the second round of voting for the 2012 Olympics.

United States Olympic Committee leaders appeared stunned by the news and had no comment as they left the voting hall. Mr. Obama was flying back to Washington at the time of the vote.

But…but…he’s magic. No one says no to O. Right? Am I right? Notice he flew out immediately, being the busy man he is. Had to get back to ignoring the situation in Afghanistan, where that hopey-change thing is definitely not working. Someone needs to have a serious talk with the Taliban.

Actually, Obama is a sports fan, so the loss must’ve smarted a little. But he wasn’t there on his own dime — it was your dime, my fellow Americans — and he was simply following orders from the guys what brung him to the dance, i.e., the Cook County machine.

In the official question-and-answer session following the Chicago presentation, Syed Shahid Ali, an I.O.C. member from Pakistan, asked the toughest question. He wondered how smooth it would be for foreigners to enter the United States for the Games because doing so can sometimes, he said, be “a rather harrowing experience.”

If the response had been honest, the President would’ve said, “Hey, Jack. Just living in your country can be a harrowing experience. Buncha Muslims gave us 9/11 and now we check you guys coming in. Deal with it. The little old grannies that we search survive the experience. What’s the problem?”

But no. Obama had to answer in political-speak:

“One of the legacies I want to see is a reminder that America at its best is open to the world,” he said, before adding that the White House and State Department would make sure that all visitors would feel welcome.

So we “lost”. Thank heavens. And Tokyo lost in the second round.

My guess? Rio over Madrid. It’s South America’s turn to incur all that debt:

Luiz Inácio Lula da Silva, president of Brazil, gave an impassioned speech to the membership, focusing Rio de Janeiro’s hope to host South America’s first Olympics. He said that of the top 10 economic powers in the world, Brazil is the only one not to host an Olympics.

“For the others it would be just one more Games, for us it would be an unparalleled opportunity,” he said. “It would send a message the Olympic Games belong to all people, all continents and all humanity.

He added, “Give us this chance and you will not regret it, be sure.”

The Rio bid also tried to dispel worries about crime.

“We know that some of you have questions about security,” Rio de Janeiro state Governor Sergio Cabral said, as he addressed the committee. “Changes have been made, happily as a result of sport.”

Cabral pointed out that at the 2007 Pan American Games, which were held in Rio de Janeiro, “saw no incidents large or small.”

I’ll have to admit I’ve never watched the Olympics. My idea of sport is a game of croquet. Once, when the future Baron was quite young, we were visiting someone’s home and the television was on, though the sound was turned down. A commerical for that year’s Olympics flashed on the screen, complete with logo. The fB was intrigued by the image. “What’s an Oplymic?” he asked.

Needless to say, the other boy in the room was shocked. Was this kid from Mars? Further questioning proved it. “The Super Bowl”? Must be a big container for chips.

He knows a little more today, but professional sports is to him, as to his parents, an opaque enterprise. So Chicago spent $50,000,000 in an attempt to lure the Oplymics to town. Big deal. You pay to play in Cook County, and sometimes you lose.

And now a perfect excuse to use Danny Kaye in a post:

Hat tip to Steen for the photo. He calls it “O-dag i København” (O-Day in Copenhagen).