Our Swedish correspondent LN takes a look at the political and social situation in the modern, multicultural, multiracial, socialist entity that was formerly known as the nation of Sweden.

What Happened to the People’s Home?
by LN

An outline of an interview with Mona Sahlin, leader of the Social Democratic Party of Sweden, by Olle Lönnaeus of the Sydsvenskan, Oct. 17 2009:

She wants to let in air and freedom into the people’s home. 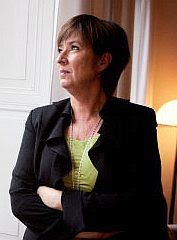 Seldom has a Social Democrat leader been so challenged as Mona Sahlin. In twelve days she will lead the party congress that will pave the way for a red-green [a social democrat, green, and former communist conglomeration of parties] victory in 2010. Where is the vision?

“I want to paint the people’s home in the colors of the rainbow,” she says in an interview with Sydsvenskan.

The first thing I ask Mona Sahlin, when we settle down in her shocking pink sofa is her feelings for the expression people’s home [folkhem, a.k.a. welfare state].

“I love that expression,” she says.

“It expresses that if a family feels uncomfortable it affects the whole family. We need each other. There are no darlings or stepchildren,” explains Mona Sahlin.

In an interview in Sydsvenskan last summer the editorial writer Katrine Kielos of Aftonbladet accused the Social Democrat party leadership of being stuck in the people’s home nostalgia and of talking to people as if they were stupid.

“My vision of the people’s home is certainly not nostalgia, but the desire to change things,” says Mona Sahlin.

“The whole idea of the deliberation we carried out in the party was saying ‘come on, we must look ahead’. Because the people’s home is in need of modernization. 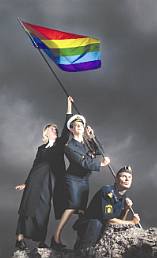 “I want to repaint the house and rearrange the garden to get more freedom and air. Knock out partition walls. The old people’s home has become rather stuffy.”

In Mona Sahlin’s rainbow-colored people’s home there will be neither room for homophobia nor xenophobia.

But her vision also involves a reconsideration of the Social Democrat policy in key areas.

The people’s home is no longer a concept that the Social Democrats have a monopoly on.

The Sweden Democrats’ siren-call of a blond and blue-eyed welfare state, Mona Sahlin dismisses as “a cheap trick of a xenophobic party.”

But even the Conservatives [Moderaterna] say that they now want to become a state-bearing party in which everyone will feel at home.

“The Social Democracy is strongest when we can show that the welfare system means something for everybody. Not only to those who just currently have lost their jobs, or are sick or on parental leave. But actually for everybody. People see the effects that policy has on others. And how are the opportunities for their own kids to get a job? Or their old mum or dad to get decent health care.”

And she herself states that she was both impressed and inspired by Barack Obama’s presidential campaign, where the Democrats using Twitter and emails influenced millions of Americans to engage in the work.

“That we intend to swedenize,” says Mona Sahlin.

The mandate of the campaigners will not only be to package the socialist message, but also to convey the image of a credible red-green government alternative.

Mona Sahlin now diplomatically says that there are “three parties of equal merits to form a government together.”

“I is very easy for me to talk, laugh and solve political problems together with both Lars Maria and Peter, says Mona Sahlin.

[Lars Ohly, the Left Party, former Communists; Maria Wetterstrand and Peter Eriksson, both spokespersons for the Environmental Party the Greens]

What people are talking about over the kitchen tables in the people’s home has been of great interest to some Swedish politicians this autumn.

The leader of the Sweden Democrats, Jimmie Åkesson, in a recent talk at the annual meeting of his party, made the following assumption:
– – – – – – – – –

…there people talk — also about the neighborhood girl who has been sexually harassed by the local immigrant gang at school and is being called a whore just because she is blond and Swedish.

One wonders how it can be possible that a newly-arrived older immigrant who has never lifted a hand in Sweden to earn a living and never paid a penny in taxes can get a much higher pension than each of the old parents.

One wonders why Swedish health care, which cannot offer grandma a simple cataract surgery, is suddenly forced to devote resources to abortion tourism and on mutilating fully healthy boys.

One wonders about what will happen to the job when the employer, thanks to the conservative government’s so-called “gain-a-footing-into-jobs” [instegsjobb], can now choose to hire an immigrant for only 25% of the regular cost.

One also talks about how crazy it is that the assailant, who last year robbed and assaulted the son in the family, could come out of prison after only a month. Or he may not even have been sentenced to prison, he only might have had to rake leaves in the playground.

For sure the people’s home has changed.

In the FOLKHEM — the people’s home a.k.a. the welfare state — thirty years ago there were no demands for hijab, niqab and burqa-wearing, no demands for burkinis and for loin cloths in swimming baths and no segregated male/female swimming hours.

No discussion of hijab-wearing by employees and among teachers, in the police or in public institutions.

No demands for prayer rooms at workplaces, universities, schools, and in official buildings.

There was no rejection of handshakes.

Humans, animals, food and school meals were not divided up in unclean/clean — haram/halal.

No uncivilized demands for animal-tormenting halal slaughtering occurred and no chickens were halal-slaughtered.

There were no bans on pigs and pork, on alcohol, or on keeping dogs as pets.

Ordinary secular people making up the majority of the inhabitants of the then Sweden and ordinary believing Christians were not called infidels or kafir, neither racists nor xenophobes nor Islamophobes.

Swedish indigenous females from 10 to 85 were not called whores.

No municipal cooperation and no official consultations with imams occurred.

There were no parallel societies, no apartheid cultures, no sharia law, no mosques, no child brides, no (concealed) polygamy, no virginity certificates.

No girls were genitally mutilated, either concealed within the no-longer-existing borders, or by being sent to Africa or the Middle East.

There were no forced and/or arranged marriages and no honor killings.

No bullying of children and infidels who did not fast.

No considerations for the physiologically unwholesome Ramadan.

No harassment of women who did not cover themselves with a hijab or niqab.

No scarves, or cravings for, on female TV hosts, teachers, police, politicians, judges or whomever.

No robberies by youths.

No gang-rapes and definitely very much less criminality.

No car-torchings and no fights with the police and the fire brigade(!!!).

No prohibition on drawing, writing and speaking out about whatever you might think or want as long as you did not unjustly defame an individual.

The politically-fabricated phrase: racial agitation did not exist.

All these idiocies came with Islam, the pious religion of love and peace. They came with the Muslims.

Today in Sweden approximately one person in twenty is a Muslim. Tomorrow…?

In the times of common sense and the old people’s home, which was built by the people not for the people, there was a Social Democratic Minister of Welfare by the name of Gustav Möller (1884-1970) who stated that:

Every inefficient use of tax money is thieving from the poor.

Mona Sahlin (a.k.a. Mona Muslim) has for certain declared that a generous refugee policy [generös flyktingpolitik] will be maintained.

Why is her mental sanity not called in question?

11 thoughts on “What Happened to the People’s Home?”