For the last decade or so the Council of American-Islamic Relations has increased its influence in the United States while infiltrating our political, cultural, civic, and academic institutions. As the North American front for the Muslim Brotherhood, it functions as a fifth column in our midst with at least tacit support from parts of our own government.

But turnabout is fair play: CAIR itself has now been infiltrated.

P. David Gaubatz and Paul Sperry have just published a book called Muslim Mafia: Inside the Secret Underworld That’s Conspiring to Islamize America, which is based on a “yearlong penetration of the Council on American-Islamic Relations that resulted in the collection of thousands of pages of revealing documents as well as inside secrets.” 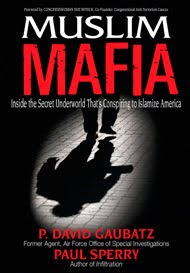 This trail of information reveals the insidious and well-funded efforts of the seditious Muslim Brotherhood under the nonprofit guise of CAIR to fully support the international jihad against the United States, with the goal of transforming American society from within. They hope to accomplish this through terrorist activities, fraud, and infiltration of our political and intelligence systems, which these documents clearly reveal.

Joseph Farah at WorldNetDaily has this to say about the book:

Think of it as the ACORN sting on steroids.

It’s the result, in part, of a six-month-long undercover operation inside the Council of American-Islamic Relations, one of the most visible and prominent Muslim lobby groups in the country. You see its representatives and spokesmen on national television. You hear them whining about anti-Muslim bias and bigotry in the U.S. You hear them talk about supposed civil liberties violations against those who do nothing but practice the Islamic faith.

What you don’t hear much about is the group’s associations and support for known terrorists and its relationship with the Muslim Brotherhood — the same organization that spawned al-Qaida, Islamic Jihad, Hamas and Hezbollah.

That’s the story you will read in Muslim Mafia — based on years of investigative reporting, recently declassified FBI evidence and 12,000 pages of compelling internal documents gathered in the daring covert penetration of CAIR.

But the book is more than a Muslim Brotherhood conspiracy to support terrorism, infiltrate the American system and move the country toward Shariah law. It’s also the real-life story of a brave father and son team who worked on the undercover operation — not over a few days or weeks, but for six long months. It’s the daring story of how Gaubatz’s son Chris and two hijab-wearing female interns ventured inside the Muslim Brotherhood beast.

That’s why I call it the ACORN sting on steroids.

This sophisticated and prolonged undercover investigation inside the headquarters of a terror-supporting front group was both more dangerous and devastating in terms of the volume of smoking-gun evidence collected. Essentially, this team of brave private investigators went behind enemy lines and lived to tell a shocking story of terror, fraud and sedition.

“The evidence found in the investigation is incontrovertible — after all, it’s their own documents laid bare,” says co-author and investigative journalist Paul Sperry, a former WND Washington bureau chief. “With more than 12,000 pages of support documentation, more than 40 pages of footnotes and an appendix containing more than 50 pages of exclusive confidential documents, ‘Muslim Mafia’ offers hard proof of the Muslim Brotherhood’s subversive strategy against America.”

Some of the main highlights of the book, according to Mr. Farah:

I hope Messrs. Gaubatz and Sperry are well-supplied with lawyers and kevlar — the Godfathers of the Ummah will not be happy with what they have done.

This book looks to be a real eye-opener — I’m eagerly anticipating the arrival of my copy.

2 thoughts on “The Godfathers of the Ummah”