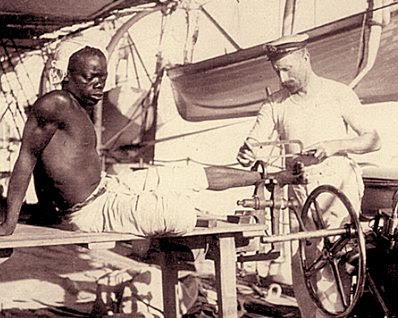 The photo above was taken in about 1907, and shows a British sailor sawing the shackle off the leg of an African slave.

Where was that slave bound before he was freed by the British?

In 1907 there was no longer any market for slaves among white people anywhere in the world. In fact, there was probably no market at all for slaves except in black Africa or among the Arabs. In all likelihood that slave was going to be sold on the Arabian Peninsula or perhaps to African Muslims.

Who captured the slave?

He was probably captured by another black African from a neighboring tribe, either in warfare or as a part of a deliberate slave-taking raid. The Arabs rarely captured black slaves themselves, and this slave might have been brokered several times by African traders before arriving at his final owner.

In any case, both the slave-taker and the customer were almost certainly Muslims.

Yet white Europeans are to blame for all this. As our multicultural indoctrination has drummed into us over and over, white people are the cause of all the world’s evils, including the enslavement of Africans.

Somehow, perhaps through diabolical mind-rays, we induced the Africans and the Arabs to enslave millions of blacks and then trade them among themselves.

It just goes to show how viciously omnipotent we white people are.

A set of rare photographs showing African slaves being freed by the Royal Navy have gone on show for the first time.

They are part of an exhibition marking the bicentenary of the abolition of the slave trade.

Samuel Chidwick, 74, has donated the photographs taken by his father Able Seaman Joseph Chidwick, born in 1881, on board HMS Sphinx off the East African coast in about 1907.

The photographs, on display at the Royal Naval Museum, Portsmouth, Hants, show a sailor removing the manacle from a newly-freed slave as well as the ship’s marines escorting captured slavers.

Mr Chidwick, of Dover, Kent, said: “The pictures were taken by my father who was serving aboard HMS Sphinx while on armed patrol off the Zanzibar and Mozambique coast.

“They caught quite a few slavers and those particular slaves that are in the pictures happened while he was on watch.

“That night a dhow sailed by and the slaves were all chained together. He raised the alarm and they got them on to the ship and got the chains knocked off them.

“They then questioned them and sent a party of marines ashore to try to track the slave traders down.

“They caught two of them and I believe they were of Arabic origin.

“My father thought the slave trade was a despicable thing that was going on, the slaves were treated very badly so when they got the slavers they didn’t give them a very nice time.”

Jacquie Shaw, spokeswoman for the Royal Naval Museum, said: “The museum and the Royal Navy are delighted to announce the donation of a nationally important collection of unique photographs taken by Able Seaman Joseph John Chidwick during his service on the Persian Gulf Station where the crew of HMS Sphinx were engaged in subduing the slave trade.

“The collection comprises a fascinating and important snapshot of life on anti-slavery duties off the coast of Africa.”

The exhibition, ‘Chasing Freedom -The Royal Navy and the suppression of the Transatlantic Slave Trade’, is being held until January next year to mark the 200th anniversary of the abolition of the slave trade.

The House of Commons passed a bill in 1805 making it unlawful for any British subject to capture and transport slaves but the measure was blocked by the House of Lords and did not come into force until March 25, 1807.

Mrs Shaw said that since the exhibition opened, members of the public had brought forward several historically-important items.

She said: “As well as these amazing images, members of the public have brought many other unheard stories of the Royal Navy and the trade in enslaved Africans to the museum’s attention including the original ship’s log of the famed HMS Black Joke of the West Coast of Africa Station.”

17 thoughts on “The Evils of Colonialism”