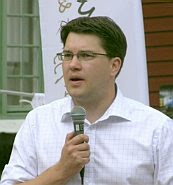 Jimmie Åkesson is the party leader for Sverigedemokraterna (the Sweden Democrats). SD’s staunch opposition to mass immigration has made Mr. Åkesson and his fellow party members outcasts in Swedish politics, and the elites and the media never miss an opportunity to attack, smear, and sandbag the party.

Both Aftonbladet and Sydsvenskan have refused to carry paid advertising from the “racist” Sweden Democrats, but for some reason Aftonbladet was willing to carry an op-ed by Mr. Åkesson in today’s edition.

The paper, however, could not resist contriving some devious agitprop concerning Mr. Åkesson’s piece. Consider the difference between these two statements:

Islam is the greatest threat.

The Muslims are the greatest threat.

The distinction is not insignificant; Geert Wilders has taken great pains to emphasize it in his speeches and policy papers. But Aftonbladet decided to play fast and loose with the truth and thereby stick the ol’ Afton Blade between Jimmie Åkesson’s ribs.

Our Swedish correspondent LN has been following the news closely, and has sent frequent dispatches to Gates of Vienna as the situation developed. The results are compiled below; all translations are by LN.

First, an overview by the translator:

Today a journalistic war has started in Kretinostan. Aftonbladet presented an op-ed article by the Jimmie Åkesson, “Muslimerna är vårt största utländska hot” = “The Muslims are the greatest threat to us (since WW2)”.

I myself wondered if Åkesson could be so stupid as to write “Muslims…” instead of “Islam…” I had a suspicion that Aftonbladet chose that word for him.

Now it looks like the caption “Muslimerna är vårt största utländska hot” = “the Muslims are the greatest foreign threat to us (since WW2)” was constructed by Aftonbladet alone.

I have visited some SD home pages and the opinion is unanimous: whether Muslims as a “folk group” or Islam as a religion makes up a threat is certainly not small potatoes, legally speaking.

If this is true, it would be deliberate slander.

Readers will note the similarity between what LN said last night and what Jimmie Åkesson said in his op-ed in Aftonbladet:

Twenty years ago, I think it was difficult for most Swedes to imagine that Islam would become Sweden’s second largest religion, that Swedish artists who criticize or joke with Islam would live under constant death threats, that some ten Islamic terrorist organizations or representatives thereof would be established in Sweden, that leading Muslim representatives would make demands for the imposition of Sharia laws in Sweden, that Swedish county councils would use taxpayers’ money to cut off the foreskins of fully healthy little boys, that Sweden would have the largest number of rapes in Europe and the Muslim men would be highly over-represented among the perpetrators, that Swedish swimming halls should introduce separate bathing times for men and women, that Swedish municipalities could consider the inclusion of gender-segregated swimming in schools, that freezer counters in our grocery stores would offer ritually slaughtered meat, while Swedish nursery schools and kindergartens stop serving pork, that Swedish schools would introduce new holidays to celebrate the end of Ramadan, while the church is prohibited from school/term closing ceremonies in more and more schools and so on.

All this is now part of the Swedish reality. The question is how it will look in a few more decades, when the Muslim population, if the current pace persists, has multiplied in size and many of Europe’s major cities including Malmö will most likely have a Muslim majority.

Reinfeldt: We need to promote tolerance

The prime minister is critical of Jimmie Åkesson’s op-ed in Aftonbladet. Prime Minister Fredrik Reinfeldt (M) believes that the Jimmie Åkesson(SD) article is significant concerning what the Sweden Democrats want to achieve.

And Journalisten reports that the dreaded hets mot folkgrupp (agitation against an ethnic group) is being directed at Aftonbladet:

Aftonbladet has been reported to the police for hets mot folkgrupp

Mariam Osman Sherifay, chairman of the Center Against Racism, reports the Aftonbladet to the police for the publication of Jimmie Åkesson’s debate article. Mariam Osman Sherifay writes on Newsmill that the article is “so openly racist that no explanation as to why I report it is needed.” She believes that the publication follows a pattern through which the Sweden Democrats are allowed an increasing foothold in the Swedish general public, and wonders how far Aftonbladet is willing to go: “Could the newspaper publish an article in which “the Jews” are highlighted as the major threat to our country?

Wolodarski spoke about “crude/rude and aggressive racial agitation”; “this is open racism”; “this time it is about Muslims, next time it will be about Jews”.

Mona Sahlin was asked about her opinion and spoke about the Muslims as a “big part of the Swedish population” (ca. 5%!).

Prime Minister Dhimmifeldt was also asked — and had the same to say as in today’s Local.

The “Centrum mot Rasism” (CMR), the notorious “Yvonne Ruwaida League”, led by Mkyabela Sabuni, an uncle to the minister Sabuni, has expressed the intention to report (to the police) the AB for “racial agitation”. Let us hope they do — it will cause SD to expand!

With all these well-chosen words the standard of the debate is/was set.

Stupidity and ignorance (true — or pretended?) on the highest level.

Kretinostan is the rightly-deserved name of this miserable and unsuccessful country.

Sweden Democrats Lash Out Against Islam

With their party conference just barely over, the ultra right wing Sweden Democrats are creating headlines in Sweden again.

In an article in Swedish tabloid Aftonbladet Jimmie Åkesson, party leader, writes that Islam is the greatest threat against Sweden since WWII.

An article by the leader of the far-right Sweden Democrats claiming that Islam is the biggest threat to Sweden since World War II is tantamount to hate speech, according to legal experts.

A number of jurists believe the text, published in the opinion section of the Aftonbladet newspaper, qualifies as agitation against an ethnic group (hets mot folkgrupp).

Further material from Aftonbladet (in Swedish):

13 thoughts on “Putting Words in His Mouth”