In the following guest-essay, a reader named Robert Stansfield offers a suggested strategy for dealing with the ever-growing demands for accommodation by Muslims in the West. 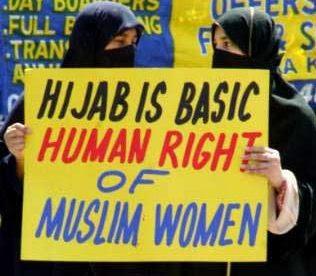 Muslims in the West are constantly making demands for freedom: freedom to build mosques, freedom to wear the burka and hijab, freedom to practice Sharia law. They generally present these demands as basic rights owed to them by the countries in which they live. And Western liberals — even those opposed to the Islamic agenda — are hard-pressed to rebuff them.

This is due to a faulty conceptualization of the issue. A new approach must be adopted. Let’s call it “Linkage”. The idea is simple: Muslims have no rights in Western lands as long as non-Muslims are being persecuted in Muslim lands.

We all know what’s going on in Mecca. Christians, Jews and other faiths are barred entry in a form of Islamic apartheid.

Yet Muslims have the gall to demand footbaths and other frivolous perks in our lands. The hypocrisy reeks like a sewer. It’s obscene, and even the most unconcerned layman can immediately perceive the unfairness. Muslims are only concerned for freedom when they are on the receiving end.

This is my proposal: We in the anti-Jihad movement should adopt the principle of “Linkage” as a war cry. We should repeat it like a broken record. Advocate it relentlessly on blogs and in street demonstrations. Distribute flyers. Pressure politicians. Run television ads. Make it into T-shirts and hats and coffee mugs. Glue posters to walls with really stubborn glue. DEMAND fairness!

The principle of linkage is already making inroads. Last year, the Russians demanded a quid pro quo from the Saudis:
– – – – – – – – –

A Saudi Mosque in Moscow in Exchange for a Russian Church in Mecca?

The king of Saudi Arabia has announced that he is ready to support the construction of a mosque and Islamic cultural center in Moscow, a city with only four mosques for its more than two million Muslims. In response and probably to block this, Orthodox Christians in Russia have called for opening a church in Saudi Arabia.

After the Saudi offer was reported, three Russian Orthodox groups — the Moscow section of the Union of Orthodox Citizens, the Radonezh Society, and the Byzantine Club — released an open letter to Saudi King Abdullah suggesting that there should be another mosque in Moscow only after a Russian Orthodox church was opened in Mecca.

Jean-Louis Cardinal Toran, the head of the Papal Council on Inter-religious Dialogue, agrees:

If Muslims consider it correct to have a large and beautiful mosque in Rome, then it is equally correct for Christians to have a church in Riyadh.

Alison Ruoff, a prominent evangelical member of the Church of England’s General Synod, has applied linkage:

Mrs Ruoff, a former magistrate, said in an interview with London’s Premier Christian Radio that no more mosques should be built in Britain until all persecution of Christians in Muslim nations had ceased.

Yet when one sees the number of mosques being erected in Britain, often with money from Saudi Arabia, I wonder why no Far Left individual raises the question of hypocrisy. Saudi Arabia funds the export of Islam around the world (even to Nepal), yet prevents any Bibles from being brought into their kingdom. No churches are allowed to be built in Saudi Arabia, and migrant workers who hold unofficial Christian services have been jailed.

Similarly in Pakistan, Christians are a minority group, yet they are persecuted mercilessly. In Malaysia, no one is allowed to leave Islam and Buddhists, Hindus and Christians are legally defined as second-class citizens, and yet Malaysia regards itself as upholding a “civilizational” form of Islam.

The principle of linkage is gaining momentum. With the help of everyone in the Counterjihad community, we can broaden it into an avalanche.

“NO MORE MOSQUES IN WESTERN LANDS, UNTIL THERE IS A CHURCH IN MECCA.”