Our Swedish correspondent LN reports that this op-ed by Lena Andersson, published on October 24th in Dagens Nyheter, is “the most-read piece in cultivated circles in Kretinostan.” Many thanks to LN for the translation: 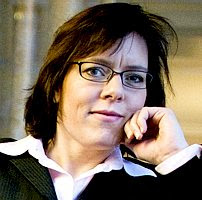 Last Monday there was an obituary notice in this newspaper for Mohammed Knut Bernström, who died at the age of 89 in Morocco. Bernström was a former diplomat, a Muslim convert, and had translated the Koran into Swedish. One read that Bernström felt that language is the key to the culture, and he liked to quote an Arab proverb: “A nation is its culture. Losing the culture, the nation loses itself.”

It is curious how harmless such a statement sounds when it is made about Arab culture, or uttered at all about cultures other than one’s own. But is there any real difference? How did Bernström argue that a nation loses its culture? By its people losing its contact with their cultural heritage and the history of art, or through the effect of cultural influences that change the social norms of the society?

I do not know, but you must admit that Jimmie Åkesson and the Sweden Democrats are following the same line — that must be said. But they do not enjoy the same respect as does the educated convert in Morocco.

Any visualization of monocultural, uniform, single-minded culture-preserving societies is daunting. They become unified and complacent. Without outside influences the result is spiritual inbreeding and desiccation. But all influences are not equally good — a society must keep the discussion of its own changes alive.

A good deal has been said in a hysterical tone about this week’s article by Jimmie Åkesson. The problem is that he is right on one point: the fact that the Swedish society has been influenced by Islam during the last twenty years can be considered good or bad or both, but true it is.

Some of the facts found in the article about Sweden’s development have not been rejected, but have been met with complete contact fright. This applies to requests for special laws and for segregated swimming, and that swimming baths offer separate hours for men and women because of Islamic gender segregation, the withdrawal of pork meat at nursery schools or pre-schools in Malmö, and death threats against artists who hold up religious symbols to ridicule.

It should not be difficult to see that these phenomena to a varying degree may be perceived as problematic. This does not cease to be so because someone whose ideology is undesirable gives expression to it. And the interpretations of Islam that gave rise to the phenomena are also rather undesirable.

It becomes quite baroque when Maud Olofsson [deputy Prime Minister and leader of the Centre (social liberals)] debates in the early morning television (SVT 20/10) and allows Åkesson to be the one who defends (1) women’s rights and (2) common laws that are the same for all citizens. Hissing with rage, Olofsson declares that surely we cannot have Sharia laws in Sweden. However, nothing is sure in a pluralistic democracy; everything can be subject to a slow change. That’s one reason for having a democracy.

We are in trouble if it is the Sweden Democrats — acting in the idea-tradition that female emancipation has hardly been high on their the agenda — who will plead the cause of enlightenment and of gender equality, while supposedly enlightened representatives of the media, the scientific community, and politics are unable to sort through the arguments, but instead with their silence are selling out libertarian values and pretending that everyone agrees on them, just to show how much they are opposed to SD.

The reactions to the populist parties in Europe are often emotional in this way. When, for example, they talk about the Islamization of Europe and the radicalization of Islam, you never get a clear vision whether they should keep quiet because they are factually wrong, or because they are factually right. Anything that is related to ethnic groups other than their own must simply never become a worry, even if it happens to be worrisome. If it does, the root of the worry must be located in one’s own group’s attitudes, never in the attitude of the minority. This may be right in order to avoid fragmentation and to prevent exposed groups from feeling unwelcome in their country of residence, but it will not promote a reasonable debate about the changes in society.

For my part, I oppose the influence that ideas held by any conservative religion concerning the relationship between the sexes, or regarding blasphemy and God’s role in society, might have on the liberal norms Sweden has painstakingly created for itself. It matters not at all if Jimmie Åkesson is of the same opinion. It is more important not to desert those who have fled from religious oppression by trivializing the practice of values causing repression and calling it tolerance, tradition, and warm religiosity.

It is increasingly common to regard the Muslims as an ethnic group, as the Sweden Democrats [the writer here is mistaken — translator], official Sweden, and some Muslims seem to do. But religion is something you choose. Muslims in Sweden are a group that also contains people who do not believe in God and people who devote their lives to fighting Islam.

To ethnify religions leads to errors, but fits the needs of the nationalists, the benevolent cultural relativists, and blunt statistics. It is also an excellent tactic for those who want to protect their doctrine from criticism to call criticism racism.