It is a relief to have the Olympics distraction behind us.

Having spent a fruitless afternoon with our carpenter while he waited in vain for the man who was to give estimates for installing gutters, I came back into the house feeling annoyed that the man had neither showed up nor called. I reminded myself that he might be stuck on someone’s roof, or his phone was out, etc.

I arrived back at Gates to find the usual compulsive — and eminently deletable — graceless comment from Nodrog (yes, it has been consigned to Comment Hell, and no, it wasn’t interesting).

Feeling at loose ends, I checked our site meter. Blog traffic follows various daily, weekly, monthly and seasonal patterns. When we were starting out, Bill Quick at Daily Pundit warned us that weekend traffic was always slower than the Monday-through-Friday pattern. He was right.

Perhaps during the week people are at work and many are already on their computers, working. A visit to their blogs of choice is just a quick peek (or longer) to see what’s up. Come Saturday, though, those same working people are busy with errands, chores, and socializing, i.e, real life. Thus, the numbers in the blogosphere (Bill Quick invented that word, by the way) drop, even on Drudge.

So I looked at our traffic today, and sure enough, the slight descent of Friday afternoon is beginning. Folks are getting ready to go home, hitting the remaining items on their office “To Do” lists, or getting out ahead of the horrible Friday evening commuter crush. 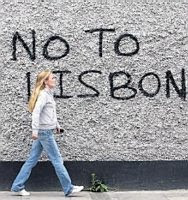 And idle glance at our referrals brought me here, and I suddenly remembered: oh my gosh, the referendum vote! The choice of a site for the Olympics pales in comparison to the outcome of this oh-so-crucial decision.

I’m putting up Mr. Connolly’s last post, and the one that preceded it. They’re short and worth a perusal.

In the penultimate post, he links to a news article I hadn’t seen (which doesn’t mean no one sent it to me – up until yesterday, it was a focused week of thank you notes):

Looks like the Irish bishops were wrong, or certainly misguided, to back the Lisbon Treaty. One wonders where their true loyalties rest. Cardinal Tarcisio Bertone knows the score.

From the UK Telegraph:

As Irish voters go the polls for a second time on the treaty, “No” campaigners have seized on comments made by Cardinal Tarcisio Bertone, Vatican Secretary of State, during the Pope’s visit to the Czech Republic.

The comments followed unhappiness in the Vatican that the EU refused to recognise Europe’s Christian heritage in the text of the Lisbon Treaty.

The EU has also upset Catholics in the past by ruling abortion provision should be treated as a “medical service” no different from any other treatment.

“Individual European countries have their own identity. The EU prescribes its laws or views to them and they do not have to fit with their traditions and history. Some countries are logically resisting this — for example, Ireland,” said Cardinal Bertone.

“If Europe recognised homosexual couples as equal to marriage, for example, it would go against its own history. And it would be right to stand against it. The Church wants to encourage states in this.”

Coir, a Catholic group that has claimed that religious faith and Ireland’s anti-abortion laws are under threat from the EU, welcomed the comments.

“We are very pleased that Cardinal Bertone has come out and said explicitly that the EU is imposing secular values on Ireland,” said spokesman Brian Hickey. “It is because the EU has a secular agenda that we are resisting the Lisbon Treaty.

Noel Treanor, the Bishop of Down and Connor, last week lined up with mainstream political parties to tell churchgoers that they could vote for the Lisbon Treaty “without reserve and in good conscience”.

But Declan Ganley, the leader of Libertas, which is campaigning for a No vote, said Cardinal Bertone represented the Church’s true position.

“I welcome these comments and encourage all practicing Catholics to take them on board before they cast their ballots,” he said…

Thank you, Cardinal, for siding with European civilisation and culture against the secularist Frankenstein kultur of the technocrats. But you certainly took your time.

And then his final, tired posting:

Months of campaigning at an end. The nation holds it breath as Irish voters go to the polls tomorrow to vote on the same treaty they rejected last year. Other European nations watch on with trepidation.

And, along with the other campaigners, leafletters and canvassers, I get a break from all this nonsense.

Frankly, I’m weary. Spiritually and physically. Not just from arguing and debating over this cursed treaty, but from work, and life in general. I will be on hand to analyse the results of the referendum vote over the weekend, but beyond that, the Connolly Column might just go on sabbatical. We’ll see.

Mr. Connolly’s world-weariness is painfully obvious. This has been such a long, hellish slog against the monied technocrats who would reduce Europe to regions, and her inhabitants to a nightmare labyrinth of endless regulation. No human being ought to be forced to live in such a spiritual desert.

My prayers for Ireland, and for Europe, tonight.

4 thoughts on “Back to Reality: Ireland’s Vote on the Treaty”