Lloyd Marcus, writing at The American Thinker weighs in on this phenomenon, which is evidently widespread: 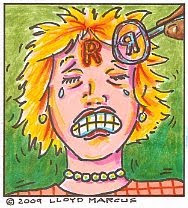 I have been a faithful Rush Limbaugh radio show listener for almost 20 years. I have never heard Rush make one racist comment. As a matter of fact, I am a black man who has been inspired and encouraged by Rush on numerous occasions. Rush is part of a partnership bidding to purchase an NFL football team. I am highly offended watching the liberal media’s all out assault on this great American. In their efforts to block Rush from ownership of a team, the liberal media and the Left are attempting to brand Rush as a racist.

The media’s charges of racism against Rush are totally based on supposed “racist quotes” which cannot be documented and comments knowingly taken out of context from his radio show. As a member of Rush’s weekly 20 million listening audience, I take the assault on him personally. If Rush is a racist, then isn’t it logical to assume that we, his listeners, are equally guilty for tolerating his racism?

Mr. Marcus ought to consider marketing this image. If someone has his email, can you write to him and suggest this? It would be another effective means of ridiculing the banal “Raaaaacist”! charge that the hair-trigger Lefties have used as a weapon to shoot at conservatives.

Follow the money on this one to find out why Chazzer & his new Lefty friends are jumping on Rush.

Hey, hey sports fans! Do you think this kind of character assassination would be going on if [insert popular Lefty commentator name here. I can’t think of any] was the one doing the buying?

By the way, notice that the main Limbaugh critic cited is a Fox News sports columnist.

I’m getting my faith in the blogosphere back. It’s tenuous, this newly-recovered belief, but when one sees major blogs like Ace say:

Charles is the guy that the Sanity Squad claimed had integrity when he began attacking us for purportedly supporting Euro-Nazis. Do you think any of them — ShrinkWrapped, Dr. Sanity, Neo-Neocon, or Sigmund, Carl, and Alfred — will revisit their diagnosis? Perhaps they have done so already and I just didn’t hear about it.

And how about Charles’ “sources” back then?
– – – – – – – – –
Folks like Dave of Sweden who used the Swedish ngo, EXPO, to support his attacks on Sverigedemokraterna, the political party in Sweden that has been targeted by the Left. It still remains the fastest-growing party in Sweden.

There were others: Yelloman, Blokwatch, etc. – all black psyops “commenters” who disappeared from LGF once their smear campaign against Vlaams Belang had done its dirty work. Of course, Charles conveniently dropped the campaign against the Sweden Democrats when it proved untenable. Down the memory hole it went!

Good on you, Ace, for calling Charles on the attack on Rush Limbaugh.

Americans might not understand the intricacies of European politics (e.g., Dr. Sanity suggested in that infamous podcast that Europeans could just start their own new political parties. Obviously she hadn’t done her homework). However, Americans do know their own culture, however. Thus Ace can point to the attempts by Charles to label Limbaugh a racist as the scurrilous, untruthful character attacks they are.