Or maybe I should say “tar shoes”, since the issue that cries out for investigation concerns the extraction of oil from tar sands. Also known as “oil sands”, these petroleum deposits become competitive with other oil reserves only when the price of oil is high enough to make their extraction economically viable.

Canada has some of the most extensive tar sands in the world, and stands to benefit if it can bring the oil in them to market. Needless to say, the traditional players in the oil game have compelling reasons to suppress the tar sands industry.

Bear that in mind when you read the following email, which was sent to us recently by a reader in New York State. It concerns an incident that took place on the morning of Tuesday, September 15, at Niagara Falls, New York:

Yesterday a group of six rappelling “activists” from Washington state unfurled a huge banner on the observation deck of the Niagara Falls lookout in Niagara Falls, NY.

The banner was anti-tar sands development, and the occasion was a visit by Canadian PM Stephen Harper to Niagara Falls, Canada. Supposedly the “activists” belonged to some green movement or other. It’s a bit fishy that they were all climbers from the same place in Washington and just happened to get themselves to Niagara Falls, NY.

However, this is not the least of the assaults on the tar sands projects. China last week announced a billion-dollar investment in a major tar sands player, and surprisingly this week it was discovered that both Norway and the UAE have invested heavily as well.

Needless to say all the anti tar sands agitprop comes from so-called Greens, but my suspicion is that the funding comes from Saudi sources.

This was an intriguing idea. I hadn’t heard about the incident, so I took a quick look around on the internet.

First of all, the news stories from Niagara Falls. According to The Niagara Gazette: 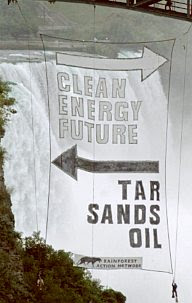 Two men and a woman climbed onto the observation tower at the Niagara Falls State Park early Tuesday and rappelled 300 feet to unfurl a giant banner protesting what they call dirty oil being imported to the U.S. from Canada.

The trio, whose efforts were broadcast online moments after they began, rappelled from the catwalk beneath the tower. As they descended they draped a banner that spelled out “Clean Energy Future,” and “Tar Sands Oil,” with two arrows pointing in opposite directions to indicate that tar oil sands are harmful to the environment.

The three rappellers, wearing 40-pound harnesses, apparently climbed onto the catwalk beneath the tower about 6 a.m. to unfurl the banner.

Park police arrived shortly after the action began and tourists gathered to watch as the three dangled for several hours about 100 feet above the bank of the Niagara River. A drop would have landed them on a paved access road below.

More news articles about the incident can be found at WCAX, The Buffalo News, and MSNBC.

According to Discover the Networks:

Sourcewatch also has an entry on the organization. The donors listed are the Ecology Trust, the Rockefeller Brothers Fund, the Rudolf Steiner Foundation, the Wallace Global Fund, the Angelica Foundation, the Arntz Family Foundation, Peter and Mimi Buckley, Kimo Campbell, the Educational Foundation of America, the V. Kann Rasmussen Foundation, the Town Creek Foundation, Marion R. Weber, and Working Assets. A minimum of $130,000 was donated to RAN anonymously.

To uncover the ultimate funding sources for the organization would require backtracking up the food chain through these groups and checking out their funding sources. A quick peek at a few of them turned up nothing notable except some cross-connections to ACORN.

The people on the RAN board of directors don’t ring any bells, and there aren’t any Arab names. The “honorary” members include some of the usual celebrity suspects who like to support Green causes.

According to the Capital Research Center (pdf), RAN specializes in shaking down corporations with intimidation and “direct action”.

At this point I passed the ball to our Flemish correspondent VH, who specializes in crawling through the dim subterranean internet labyrinths of the extreme Left. He sent back these preliminary observations:

At first I thought of a Greenpeace link because of the mountaineers used at the waterfall, and indeed, they do have two Greenpeace people on their staff:

In the pdf a lot of names are mentioned. Also some sponsors are known, like the Ford Foundation and Barbara Streisand, to name a couple.

As a side note: in the Netherlands, Greenpeace recently attacked fishermen by dumping concrete blocks [3000 kg each] in the sea where they were fishing, to mark out a “sea reserve” and cause fishing nets to be torn apart. The Greenpeace actions also violated a number of treaties.

The fishermen were outraged, because this will cause a ship to capsize when a net gets stuck on such a block. “Compare this to a mine field,” one of the fisherman said, and accused Greenpeace of attempted murder.

Greenpeace then announced that they had stopped dumping rocks, but that was an outright lie: they continued. They simply don’t care, just like the environmentalists who, beginning in 1933 and even during WWII, were all excited about the National Socialists, and massively joined the NSDAP (and that excitement was mutual, to say the least).

In their Environmental Fascism, Greenpeace is a worthy heir of the Green Nazis.

Stay tuned: we hope to have more later on the tar sands. In the meantime, let the distributed intelligence of our readership go to work!

If you hit a gusher on this topic, pipe the results over here to Gates of Vienna for further refining.