Many thanks to Henrik Ræder Clausen for sending this Danish People’s Party poster and the accompanying translation: 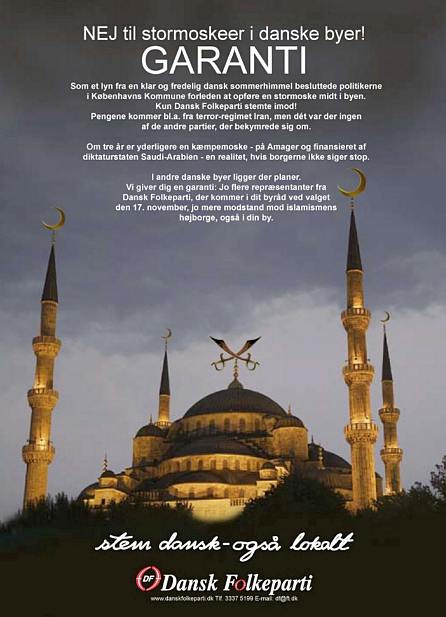 As a bolt from the blue and peaceful Danish summer sky, the politicians of the Copenhagen municipality decided the other day to erect a grand mosque in the middle of the city.
Only the Danish People’s Party voted against it!
The money will, among other sources, come from the terrorist regime of Iran, but none of the other parties in the local government had any concerns about that.

In three years another grand mosque — in the southern suburb of Amager and funded by money from the dictatorship of Saudi Arabia — will become reality if the citizens do not object.

In other Danish cities similar plans exist.
We grant you this guarantee: The more representatives
from the Danish People’s Party elected at the local
elections on November 17th, the greater the resistance
against the Islamist strongholds, in your city as well.

7 thoughts on “NO Grand Mosques in Danish Cities!”