It seems like just the other day that I was sitting at my desk on that bright September morning. My co-workers started coming in with the reports from the news, and soon all the employees were gathered around the one radio in the office that had good enough reception to pick up a clear news channel. The company president closed the office at lunchtime, and everyone went home to watch the horrors on television.

The next day we were all certain that everything had changed for good. And, looking around at what’s happening now, it seems that we were right — everything has changed, just not the way we expected.

Consider this change — this is what Ground Zero, the former site of the World Trade Center in Manhattan, looked like just before dawn this morning: 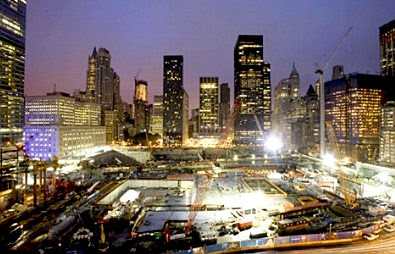 Floodlights, cranes, and a hole in the ground — not significantly different from the way it looked when the last truckload of rubble was carted off back in the spring of 2002.

Or consider this change, a video of Joe Biden addressing the families of 9-11 victims this morning at Ground Zero:

Quite a difference from the sentiments expressed on television 2,921 days ago, yes?
– – – – – – – – –
The Vice President displays a New Word Order of oratorical idiocy. Even when reading from “Wild Geese” by Mary Oliver (with his own grammatical error interpolated), he deserves a gold medal for droning incoherence.

As Vlad Tepes said when he listened to it, “What is he talking about? It sounds like an LSD purity test.”

After eight years that hole in ground in Lower Manhattan is still there. That’s more than twice as long as it took America to mobilize, rearm, go to war, and defeat Nazi Germany and Japan in World War Two.

In the eight years following John F. Kennedy’s call to put a man on the moon, the United States went from having no manned space program, though designing and testing the Mercury and Apollo spacecrafts, to a successful landing on the moon.

The original Word Trade Center took six years to complete, from the ground-breaking to the ribbon-cutting.

In the past eight years we have seen plenty of candlelight vigils with teddy bears and flowers and tearful remembrances by the relatives of the slain.

But there’s still a hole in the ground where the Twin Towers used to be.

In the past eight years our efforts have been focused on deterring “terrorism”, and above all on the prevention of further major terrorist attacks on the United States. In that endeavor we have been notably successful.

But it’s important to remember that Osama bin Laden’s attack against the United States was a rogue operation from the point of view of the more sober-minded planners of jihad, who could only have been dismayed by his action. Not because they objected to it on principle, but because they viewed it as an enormous strategic error: he was jumping the gun.

Before then the West had been nicely lulled to sleep about the nature of Islam, even as radical Muslims poured into the cities of Europe and bought up real estate and politicians in the United States.

Then Osama came along and woke everybody up. Millions of people who had never thought about or even heard of Mohammed and the Koran suddenly became acutely aware of what Islam was all about.

Fortunately for the Great Jihad, most major Western politicians have spent the last eight years lulling their people back to sleep with soothing stories about the Religion of Peace and lullabies of tolerant Multiculturalism.

From the point of view of the Jihad, Bin Laden and his buddies in Al Qaeda are the crazies. They are imprudent and marginal people who set the cause back by showing Islam’s hand before its time has come.

The preferred strategy of the shrewd mujahideen is the probe. For the last eight years, Islam has launched thousands of probes that have nothing to do with terrorism and will never draw the attention of the FBI or Interpol. Everywhere a probe finds weakness, a newer and stronger probe is launched, until infidel resistance at that point collapses, and another tiny piece of the world is converted from Dar al-Harb to Dar al-Islam.

The probe is the continuation of terrorism by other means.

If statistics were available — and they almost certainly aren’t — it would be instructive to discover answers to the following questions:

Oh yes, things have definitely changed since 9-11. We’re no longer the same people we were back then.

Another sign of how much things have changed is revealed by the video posted by Dymphna early this morning. ACORN, the former employer of the President of the United States, cheerfully advised an undercover investigator on how he could establish a prostitution service using underage illegal aliens, disguise the nature of this operation, and receive subsidized federal housing funds while he did it.

In gratitude for the above, the very same ACORN has been authorized to receive more than a billion dollars in federal stimulus money to be used for poor unfortunates in need of housing, education, or legal help.

Eight years after 9-11, this is the kind of thing that your federal government is borrowing trillions of dollars to accomplish.

So don’t tell me that things haven’t changed. They most certainly have.

If they hadn’t, we never would have elected the Messiah as our president.

23 thoughts on “Everything Changed”