Continuing our almanac of Swedish cultural enrichment, after a brief side-trip into Gothenburg we return to Uppsala. This translation is a follow-up to last night’s post, and our Swedish correspondent CB has this to say about the new material:

From Uppsala Nya Tidning, here is a picture of the stones the “youths” are using against police and emergency personnel during the unrest in Stenhagen: 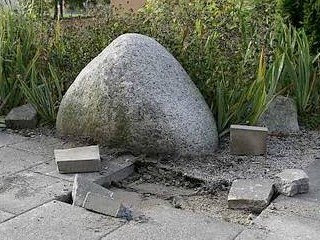 In the article one can see the size of the stones. It is as the police say in the interview: it is seriously dangerous to get hit by those stones!

The police have some protective gear for situations like this. The emergency personnel do not! People should think about this before starting to make excuses for the thugs who throw these rocks. Sooner or later people will get killed if this continues. And I can understand the guy in the news article who says that he doesn’t dare to intervene when these gangs — around 20-30 “youths” — burn cars.

After the stone-throwing died down, the police surveyed the area and found piles of cobblestones and sticks — ready for use.

Also, they had a piece on public radio about Backa in the 1970s, and apparently it was a rough place at that time as well, just in a different fashion. During the seventies Backa was like most of the newly built housing projects in Sweden — part of the so called “million program”, to build a million apartments for a growing population and people moving to the big cities (and that was before we started to abort the coming generations in Sweden, which prompted the immigration policies to replace the work force in the future, since the Swedish replacement numbers weren’t sufficient anymore). Anyway, Backa was a typical working-class neighborhood. A lot of people abusing alcohol and other drugs, people with a bleak future.

In Gothenburg these areas were also fertile grounds for extreme leftist movements in Sweden. We had these areas in Stockholm, but politically, they never turned that “red” as their counterparts in Gothenburg. Basically, Gothenburg has always been much more “red” than Stockholm. I really didn’t think about that part of history, until the radio played a tune by a then famous prog-group “The National Theatre”. They were very, very, much to the left — and quite popular in Sweden at the time.

And now for CB’s translation from Uppsala Nya Tidning:

Stone-throwing attacks against police and firemen

When rescue services fought a car fire in Stenhagen late Monday night, youths threw stones at the fire truck, breaking one of the windows. Later the police were also attacked with stones and tear gas.

The attack against the fire truck came when the rescue service was leaving the scene, and the firemen weren’t hindered in their efforts to put out the fire. The incident occurred just before 22.00 hours in the evening.

A group of about thirty youths was on the scene in Stenhagen, creating a row when police patrols came in sight. At several points the police were subjected to stone-throwing.

One policeman was hurt when a person threw tear gas at a police car. After rinsing his eyes, he is in good health. Several police were affected by the tear gas, but none was seriously hurt.

During the evening and night a total of two cars were burned and one was trashed. Also tires and other junk was burned on the street.

At two in the morning the Uppsala police reported that the area was calm. At that point one person was arrested on suspicion of violent rioting, or alternatively attempted assault.

The police summarize and characterize the incidents of the night as violent riots.