The gallery in Jutland which is exhibiting Kurt Westergaard’s famous “Turban Bomb” cartoon was vandalized over the weekend. Our Danish correspondent TB has translated a report on the incident from Midtjyllands Avis: 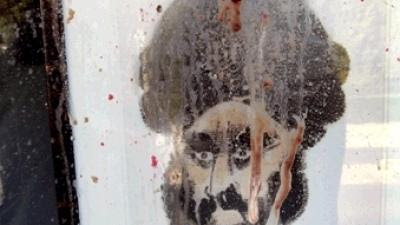 It was this reproduction of the Mohammed drawing which triggered the vandalism against the window of Gallery Farvegården.

SILKEBORG: During the weekend Gallery Farvegården on Vestergade had its window smeared with filth directly in front of an exhibit of a reproduction of the famous drawing of Mohammed with a bomb in his turban.

“I had not imagined that such thing could happen. I thought we had gotten past all that,” says gallery owner Claus Møller Jensen, who has had many reactions since the drawing was put up during the middle of last week, especially about that particular picture.

“People have stopped me in the street and asked me why I did it, and some have told me that they were angry about it,” says Claus Møller Jensen, who has been contacted by several interested buyers.

For him there was no political motive to hang the picture in such a prominent place in the window.

“It is a drawing made by one of our finest newspaper cartoonists and it is a picture known by three billion people. It is possible that they do not know that it was made by Kurt Westergaard, but it is known by more people than the Mona Lisa in the Louvre,” says Claus Møller Jensen, who has contacted the police about the vandalism but says he has not made any official report.

4 thoughts on “Vandalism at the Motoon Gallery”