Our Norwegian correspondent Zylark has translated an article about the dire circumstances of Norway’s Home Guard. He prefaced his translation with this explanatory material:

Some background on the Norwegian military, in broad terms.

The Norwegian defenses in the main consist of a professional corps of officers and NCOs. The rest of the roster is primarily made up of draftees and a small cadre of volunteers.

In recent years there has been a large program of modernization. Our Navy got themselves new frigates, our Air Force will soon get new fighters, and our Army is planning to upgrade its MBTs.

This, of course, does not come cheap. Which has left precious few resources for maneuvers and practice. With the exception of our Coast Guard and select units of the Navy, our armed forces are essentially on hiatus. Minimum activity to save money.

The stepchild in this money-saving program is our Home Guard, a wholly volunteer force. A militia consisting mainly of ex-military from our army, though other branches are represented as well. Whether privates who got their draft-period shortened by signing up, or NCOs and officers who for whatever reason (family, better paid civilian jobs etc.) enjoy the flexibility of the Home Guard, and still want to contribute to our military forces, but not full-time.

The Home Guard is essentially made up of active reservists, who on short notice can be put on active duty. As opposed to the passive reservists that have a refresher course every now and again, if the weather is nice and there are no important sporting events on television.

And now for Zylark’s translation of an article published in Aftenposten on August 19th, 2009:

An illusion. Norway has no army. The Home Guard, the new backbone of our land-based defense, can hardly stand upright. It is not even a paper tiger. It is a paper pussycat. 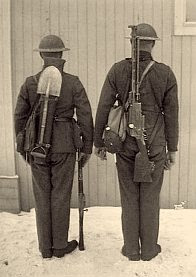 The most Norwegian of the Norwegian myths is the myth of the handsome young Norwegian who, when his country calls, slips into nikkers [trousers that go just below the knee], selbu-socks [long knitted wool socks with a distinct pattern], and a windbreaker jacket, and throws his backpack and his Krag Jørgensen [late 19th century bolt action rifle] over his shoulders. Runs into the woods, and joins others of the same persuasion who need neither organization nor joint exercises. They get their military skills by means of osmosis directly from nature, and from this nature they defeat the big bad enemy. The Norwegian man is in good physical shape, and used to mountaineering, and accuracy with the rifle is gained by his membership in the voluntary rifle-association, founded by our parliament in 1893, and still funded to the tune of 31.2 million kroner [about $5 million / €3 million] in 2009 by the Department of Defense.

The myth is still alive, but reality is different. Now the old myth is unfortunately accompanied by a new one: with the comprehensive reshaping of our military, a smaller, better trained and more modern Home Guard [HG] is to be the backbone of our land-defense — that is, the defense of Norwegian territory. The fact is, the HG as a military organization — with a few civilian support tasks in addition — really just exists on paper.

But HG men are called to pick up empty shells and look after the parking lot at a hobby-rifle competition. That is what the voluntary rifle association is, a pure hobby organization. It’s fortunate for them that they receive huge funds from the government budget, and can make use of voluntary military personnel. Imagine if the Peer Gynt Festival or the Norwegian Bicycle Association could do the same at their events!

However, I’d like to know: how would most Norwegians react if our Fire Departments, or for that matter our Police Departments, never had a chance to practice or train jointly on what their responsibilities are?

That is exactly what has happened to the HG. One does not need to be an expert in organizational theory to understand that an organization that does not practice, or use its skills in day-to-day operations, will not work. And that it will surely not work when it must operate at its best, under stressful conditions.

The HG have not practiced in 2009. The HG will not practice in 2010. But by 2011 all 45,000 of those enrolled in the HG will get to go on maneuvers; by then our military, we hope, will have received more funding, and need not stop all activity. Both practice in military tasks and joint operations are scheduled for an organization that for example was called to clean up the mess of the “Full City” shipwreck near Langesund [South Norwegian town]. Cleaning up oil from the soiled coastline requires nearly as much organization as military operations, although the effect of lack of training isn’t quite as fatal as under an armed attack.

The HG is aware of the problems, but cannot do anything about them. Though one could start by not calling in 500 men to work for hobbyist riflemen. It is possible that riflemen meet many like-minded people in the national rifle competition. But the military advantage of the hobby-shooting event is near zero in a modern defense. The HG personnel who had to cancel their vacation to pick up empty shells feel misused.

The old myth of the Norwegian feeling at home in the woods should have been relegated to the fairy-tale books a long time ago. As should the modern myth that we have a strong, well-equipped, and well-trained Home Guard.

3 thoughts on “The Hopeless Home Guard”