Our Flemish correspondent VH has compiled a report about a Turkish hacker who used his talents against Geert Wilders. First, a translation from Elsevier:

“Wilders photoshopped to resemble a monkey”

In recent days hundreds of websites have been hacked, with the results showing visitors an edited photo of Geert Wilders resembling a monkey. The hacker used the pseudonym aLpTurkTegin and called himself “the grandson of Ottoman”. This is reported by the newspaper De Telegraaf.

The hacker claims with his action to wage a war against the enemies of Islam. 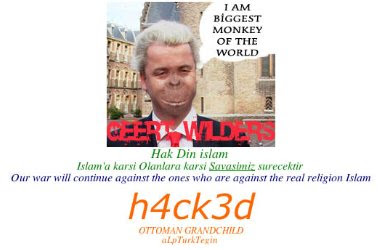 Mijndomein.nl, which has more than 100,000 customers with websites, has received dozens of complaints from distressed website owners [list of hacked pages, including mirrors here — VH].

According to Henri de Jong, co-founder of Mijndomein.nl, it is all chaos with them now. All victims are using an outdated version of the Joomla software, according to newspaper De Telegraaf.

The picture is modified in such way that Wilders will still be recognizable but also shows great similarities with a monkey. In this way the hackers’ collective aLpTurkTegin is protesting against the Dutch politician who, in their eyes, has turned against Islam.

“Our war will continue against the ones who are against the real religion Islam,” is written in English under the picture. The same text can also be read in Turkish on the defaced sites. The hackers call themselves “Ottoman grandchild”.

“aLpTurkTegin” has hacked Dutch websites before. In 2006 the group protested against the secessionist Kurdish PKK, for example, by hacking the front page of site for the Olympic stadium. The hacked page of the Olympic Stadium showed a picture of a soldier looking through the crosshairs of his rifle. The page also displayed the crescent and star that can be found on the flag of Turkey.

As a follow-up, GeenStijl reports that Dennis Veninga, who owns a web-security firm, has identified the hacker. It is Volkan Agbulak from Istanbul, Turkey:

May we present to you: the Little Anti-Wilders Hacker

Major fun of course. Hacking a few hundred websites and replacing them with a ha-ha-hilarious photo-soup of Geert Wilders as a monkey. You will be sure to get your stuff in the news then. But if at the same time you leave your backdoor wide open, sooner or later you will end up on GeenStijl.

Exactly one afternoon of searching was sufficient enough for Dennis Veninga (who has a web security firm) to identify aLpTurkTegin.

More information about Mr. Waste Bin [Dutch pun on the hacker’s surname] HERE and HERE and HERE . You may stop searching. The internetters again have solved everything…

7 thoughts on “Making a Monkey Out of Geert Wilders”