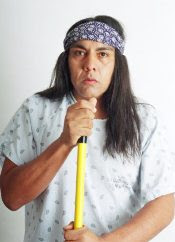 I spent much of Tuesday afternoon at a job fair in a large city not far from where I live. I updated my résumé for the occasion, put on a coat and tie, joined a throng of other job-seekers, and browsed the display tables, talking to the recruiters.

Most of the employers represented at the fair were either agencies of the federal government or government contractors. Homeland Security (in the guise of the TSA) had a table, and there were military recruiters in uniform. Two large corporations — I’ll call them Major Defense Contractor 1 and Major Defense Contractor 2 — were hiring, and there were also several smaller companies that were subcontractors for MDC1 and MDC2.

I had some pleasant conversations with the recruiters for these different organizations. The companies were definitely looking for programmers, although not any with my particular skillset. And telecommuting was mostly not an option, since the majority of positions required a security clearance, and securing a remote connection — not to mention our house itself — would be problematic.

Even so, it was fun to talk geek-talk with other people in the field, and I got some tips about future opportunities that might be coming up.

However, I left the job fair with a weird feeling. Here we are, in the middle of a deep recession, and there are still a lot of job opportunities — with the federal government, or with companies doing business with the federal government. All those trillions of dollars are flowing out of Washington and trickling down to various agencies and contractors, paying the salaries of TSA airport guards and hiring Sybase programmers with security clearances.

Six or eight years ago the federal government wouldn’t have seemed so creepy. Despite the liberal orthodoxy that reigned then (and still reigns) in the federal bureaucracy, the fact that the Executive was in the hands of George Bush made the feds seem less like the enemy.

But now the entire government — the permanent bureaucracy, both houses of Congress, the Presidency (and soon the Supreme Court) — is in the hands of the socialist Left.

And what about the military? Aren’t they still reliably pro-American, patriotic, and traditional in their outlook?
– – – – – – – – –
Well, the members of the military I know certainly are. And I presume that the bulk of rank-and-file soldiers as well as the lower-level officers are still the same solid representatives of all that that’s best in America.

But the career generals in the Pentagon are another matter entirely. An ordinary soldier may well question whether Barack Hussein Obama is constitutionally eligible to be his Commander-in-Chief, but his superiors at the loftiest levels of the command structures are ready to squash any sign of this form of patriotic dissent.

At least half of the brass at the Pentagon are go-along-to-get-along people. They work for the Combine, just like the Secretary of Commerce, the Congressional staff on Capitol Hill, and all those GS-11s from Bethesda to Burke.

These are not people whom I inherently trust at this particular historical moment. After all, the Department of Homeland Security considers people like me — people who want to abolish the Fed, hate both Republicans and Democrats, and take the Second Amendment seriously — to be “right-wing extremists” and potential terrorists.

These are boom times for paranoids.

The thrust of current events requires a conscious effort to avoid sliding into conspiracy theory. The recent actions of the federal behemoth are extremely paranoia-inducing, what with the gobbling up of private enterprise, the creation of trillions of dollars of imaginary money just to keep incompetent bankers in their plush corner offices, and the Obama blitzkrieg to socialize every important aspect of American life.

The novel One Flew Over the Cuckoo’s Nest by Ken Kesey features a mental patient named Chief Bromden. The Chief is a paranoid schizophrenic who views the entire social structure beyond the confines of his loony ward as “the Combine”, an all-powerful conglomerate composed of the government, corporations, and all the other large human collectives. Chief Bromden is aware that the Combine exists, but is helpless before it.

Now, I’m not a total paranoid — not yet — but there is a sort of Combine at work in our country today. It’s made up of the federal government and all its dependent entities, plus transnational corporations with no particular loyalty to any nation or people, and the permanent international bureaucracy represented by the UN, the EU, the World Bank, the IMF, and innumerable NGOs of all sorts.

The money and political control trickles down from these lofty places into virtually every nook and cranny in the United States. Major corporations, banking, insurance, state and local government, the school systems, charities — all of them are agents of the Combine to one degree or another, voluntarily or otherwise. I’m willing to bet that more than half of the population depends on this bureaucratic monster to at least some degree.

This is what gives me the creeps. Many years ago I worked for a couple of federal contractors, but for the last few decades I’ve managed to stay fairly independent. At the edges of official society, where small businesses and sole proprietorships are the norm, it’s still possible to achieve autonomy.

However, I have to take care of my family, and times are tough. If government-related jobs are the only jobs available, I may have to fill out the 47 pages of forms, pick up my chain-badge photo ID with the embedded chip, and go to work for the Combine.

20 thoughts on “Working for the Combine”