Our Danish correspondent TB has translated an article about an enrichment incident in Odense, and the experience of two Swedish journalists who were inadvertently caught up in it. First, here’s what TB had to say about the events:

This story counts as The Cultural Enrichment News Story of the Week here in Denmark. It serves to illustrate many different aspects of ‘The Multiculti Paradise’. Among other things it shows how immigrant areas in Western countries slowly but surely become autonomous no-go zones where police are no longer able to work without military assistance. It is a small scale example of the problems that can now be observed routinely in France.

The incident took place in Odense the other day. At the beginning it is just a normal everyday Enricher vs. Enricher incident. But when Danish police enter the picture the whole setting changes. 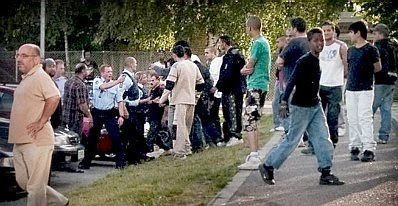 The story has a kind of inner beauty to it since the whole sequence was observed by two journalists from Sweden who were in Denmark to cover the so-called “gang war”. Suddenly these representatives of the most pure and morally superior country the world has ever seen find themselves in a war zone, only to discover that there are no evil Danish bikers or gangs involved. On the contrary, they are given a firsthand Enrichment experience.

I cannot wait to see how (or if) they are going to report about it. I must admit that I found it difficult not to laugh my head off when reading about their reactions. Oh my, they probably do not even know that this is an everyday incident in good old safe Sweden.

And the translated article from Fyens Stiftstidende:

Extremely uncomfortable, they both say

Vollsmose: It was actually meant as quiet talk with two young people from Vollsmose.

One of the last tasks for the Swedish journalist and the press photographer, who have been in Odense for the past couple of days to collect material for articles about the gang war for the big Swedish newspaper Dagens Nyheter.

But suddenly the journalist Ann Persson and photographer Anders Hansson found themselves caught in the middle of the shootout in Vollsmose Tuesday evening.

“All of a sudden, when we were sitting quietly and talking, we heard shots in the area,” journalist Ann Persson says.

“We were ‘stupid’ enough to go out to watch was happening and then everything went very fast,” she continues.

Three men in a Mercedes [ahhh yes, this is their favorite tank — translator]

Both experienced the following moments as if they were part of a movie:

A dark car, probably a Mercedes, comes driving by at high speed, three young men jump out and start running around as if they were looking for somebody.

“He does not wave it around, but holds it against his leg. At the same time the man who was wounded has hidden in a shed and it looks like the three are looking for him.”

It does not take long before two police cars arrive at the scene and then the situation develops further.

“The three men try to escape the police, but they are stopped and the officers begin to search them. It happens as they stand up, not lying down as other reports have said.

“If they haven’t found the gun on one of them it could be because he succeeded in giving it to some of the many people who gathered in the area. He had the chance to that before he was arrested,” the photographer says.

Anyway, two of the three manage to escape the police who, at this moment, do not have enough manpower.

One is in handcuffs while the other one is not. They run away to hide in the crowd, many of whom are kids.

“An officer shouts for him to stop or he will shoot, and after that people get very excited and the police have to back out,” assert Ann Persson and Anders Hansson.

“It was extremely uncomfortable for us to witness [Guess they will need some psychiatric help when they get back to safe old Sweden — translator]. The atmosphere was very charged, and I have never seen anything like it on our assignments,” Anders Persson emphasizes.

That says a lot because Anders Persson has worked in the West Bank, Gaza, and the Congo, so he has seen a lot.

“But there you know to be on guard all the time because something can happen. Here it happened so fast and was so unpredictable and one did not know who was against whom. It was impossible to read the situation.”

Many kids were watching

Ann Persson also found the whole situation extremely unpleasant and has never seen anything like it before.

“It was very confusing. Because it happened so fast, one had no chance of finding out what was going on. It was strange that so many kids and youngsters were present in the middle of something as dramatic as this, and it was obvious that there was a very hostile attitude towards the police,” she says.

Wednesday the two representatives of the Swedish press were back in Sweden again, and they plan to have their articles ready to print in the paper during the next few days.

9 thoughts on “Swedes Caught in a Crossfire”