How, you may ask, could neo-Nazism ever take hold in Finland, an enlightened and progressive country, and the very model of modern multiculturalism?

But it’s true. Out of the sauna and into the Führerbunker! Leave the reindeer herd behind and go goose-stepping down the snowy boulevards! 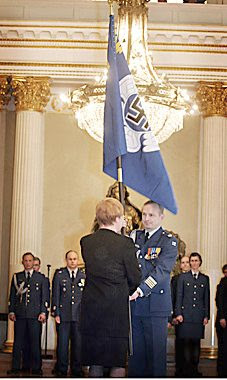 Thanks to KGS at Tundra Tabloids for an explanation of how this noxious symbol ended up on the flag:

“In 1945 the Air Force changed its national emblem to a roundel but the use of swastika in some other insignia was continued. In 1958, president Urho Kekkonen inaugurated the Colors of the Air Force units which feature a swastika design. The latest Color of this pattern was inaugurated by president Tarja Halonen 25 October 2005 for the newly formed Air Warfare School.” [1]

The picture is of the presenting of the new Finnish Air Force Academy ensign to President Tarja Halonen (SDP) on 4 October 2005, after a blessing ceremony by the bishop. [2]

Also, check out the President’s own personal flag.

1.) Western use of the Swastika in the early 20th century

2 thoughts on “Nazi of the Week”