I was shocked to learn that Nazism has arrived on the West Coast of the United States along with immigrants from China. It’s hard to believe that the Chinese people who come to this country have become radicalized by the purveyors of neo-fascist ideology.

But it’s true. Check out the photo below of a San Francisco school — an educational institution, mind you! — that is now corrupting the minds of its multicultural students with the hideous doctrines of National Socialism:
– – – – – – – – – 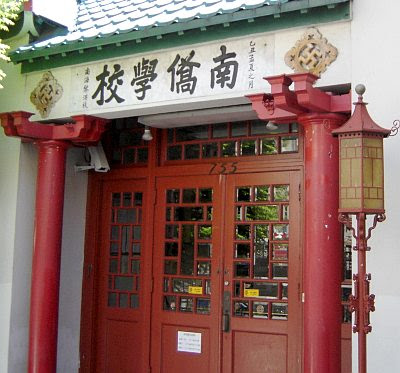 This important photograph was taken by regular Gates of Vienna commenter Jedilson Bonfim, who says:

The attached picture is one I took of a place which can be seen in the Google Maps Street-View feature, at 744 Sacramento St, San Francisco. Although the image resolution on GM is low, the swastikas flanking the entrance to the Chinese school can be seen clearly in the image I’m sending you.

Once you’ve entered “744 Sacramento St, San Francisco” in the Google Maps search box and clicked on Street View, you’ll have to face south to see the school. Though it’s actually located at 755 Sacramento St, the address aforementioned is the one that will display the school.

According to a plaque next to the door, the establishment is the “Nam Kue Chinese School, founded 1919 by the Nam Hoy Fook Yum Benevolent Society — building erected 1925”.