I’m in the middle of an anthology of articles called Kosovo: The Score 1999 – 2009, published by the American Council for Kosovo and the Lord Byron Foundation for Balkan Studies. I don’t know where one can get a copy since the Baron brought this one home from Copenhagen. Serge Trifkovic gave it to him at the conference in May.

It has been an eye-opener for one who didn’t understand the conflict in the first place, and had no idea of the over-reach of NATO at the time.

In the Foreword to the book the Canadian ambassador to Yugoslavia from 1990 to 1992, James Bisset, ends his essay with these words: [my emphasis – D]

Perhaps it is too much to hope for that the critical financial problems faced by the United States and many European countries will curtail their meddling in the affairs of smaller nations and give them pause to reflect that the rule of law applies to all and that international disputes must be resolved without the use of force [outside force? – Dymphna]. This is the hope – however tenuous – expressed by the contributors to this volume on the tenth anniversary of the bombing of Serbia.

His words echoed back when Islam O’Phobe sent the following article from the BBC:

Living in filth for 10 years

More than 2,000 Roma (Gypsies) who fled Kosovo during the conflict in the 1990s still live in Konik refugee camp near Podgorica, the capital of Montenegro.

The sprawling slum of tents and shacks is built near the largest rubbish dump in Montenegro.

The mayor of Podgorica recently said the refugees should go back to where they came from.

Does “where they came from” exist in any real sense anymore? Does the mayor care that they would return to almost certain death? Is he or his municipality willing to pay for their transport?

Save the Children is working to integrate the Roma, but few stay long in the local school.

As the UN marks World Refugee Day, Save the Children’s Phoebe Greenwood meets two men who describe appalling living conditions at the largest refugee camp in the Balkans.

Save the Children needs to institute a school in the refugee camp itself. Expecting to “integrate” them into the local schools is pie-in-the-sky “Save the Children” meaningless cant. The children need their own school, one with a kitchen and bathroom and basic meals so they are not so hungry and dirty that study is impossible.

What is the matter with these aid workers? Were they standing behind the door when common sense was handed out or do they have to turn theirs in when they join STC? 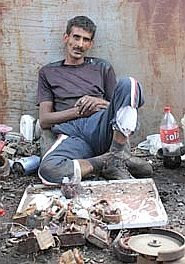 My family and I have nothing to eat, nothing to wear, nowhere to take a proper shower. We have been living like this for 10 years.

I work all day every day scouring the rubbish tips for metal to sell and maybe, if I’m lucky, earn 200 euros (£170) a month to feed my family. We cope because we have to.

I had a job in Kosovo. I ran my own business buying and selling fruit and vegetables. I would like to do that here in Montenegro but I can’t. I don’t have any resources. I’ve no money to get started.

What is needed here is the micro-loan concept used so successfully in Bangladesh. Mr. Bersia already has the work ethic to succeed. He simply has no place in which it can operate now.
– – – – – – – – –

A lot of people are sick in the camp for lots of different reasons, most often in their lungs because the air here is so foul. Lots of others have problems with their hearts and blood pressure. But in 10 years of living here, I’ve only seen the UN help one boy who was sick.

Every single country that participated in the attacks back in 1999 ought to be tasked with supplying and maintaining the basic amenities: water, showers, soap, hygienic latrines. And that is just for starters.

That’s because the refugees will die quicker that way. How else do you explain the deliberate not-enough-of-anything in this camp? We could auction off a few UN limousines and build what they need.

But the mayor mutters they should “go back where they came from”. I wonder which “where” he is considering when he says that.

Some of the kids here go to the local school. They were given books there but they have no clothes and most of the time they are hungry, so how are they meant to think about learning?

They’re not meant to do so. This is a slow motion concentration camp, not much different in purpose than the ones from the 1930s and ‘40s. If they’re going to die of disease anyway, what is the point in teaching them? It will simply be slower, Mr. Bersia.

I would leave now if I could, but where would I go? I would like to have a proper house, if only to know that I have my own home, a roof over my head. I want to leave a house for my children as my father left a house for me.

I have five children and I’m worried about their future. My heart aches for them. I was sitting here half-an-hour ago, I heard music coming from somewhere and I imagined my family dancing. But I can only imagine that now. I know I won’t see it – it’s not possible any more.

We are in a critical state. It’s too much. No-one helps us anymore. No-one comes to see how we are or how we live.

We want to live as other normal people live do. We are the same as the other refugees, the Bosnians and Croats who came to this country during the war. But the refugees from Bosnia have been given houses, all around this camp. Why do they have different conditions to us? Why do we have to live like this?

We are people too. We are humans. We need help from the UN, from the Albanians and Serbs who put us in this situation. What do they think in America, in the UK? They are also responsible for the conditions we live in. They have done nothing to help us.

You ask what do they think in America? Why, they remember jolly Bill Clinton and how he helped bomb you right into Montenegro. Maybe he could let loose some of his millions to help the mayor and your refugee camp. After all, messing with you helped him avoid the scandals of messing with young women.

How about it, Mr. ex-President, the mad bomber from Arkansas. Want to help a few Roma gypsies?

I’ll bet you really feel their pain, don’t you? Or maybe not. After all, they’ll never be your constituents, right?

They belong to no one and are not permitted to belong anywhere. The refugees are superfluous people, unseen and unheard. We are too busy watching the blood and melodrama in Iran to notice people who have spent ten years trying to stay alive.

What do you think? If we sent a letter to

would it get to him in one piece?

I do wonder if the Grameen Foundation would take this on? Or is this situation supposed to continue, put into place by the powers that be?

Not that I’m paranoid or anything.

Why does the Beeb simply report on this and walk away? They’re as irresponsible as those who caused the situation: find a story of deeply impotent suffering, tell it, and then go back to the hotel for dinner and drinks.

Yawn. On to the next spectacle.

No wonder we loathe “journalists”. They create what Bob at One Cosmos calls “mind parasites”.

Happy World Refugee Day, one day later. See you next year for a wash, rinse repeat.

3 thoughts on “The Permanent Refugee Camp in Montenegro”