Thanks to a tip from Robin Shadowes, I became aware of a deadly incident that occurred on Midsummer’s Eve in the Swedish town of Köpingsvik.

What makes this story interesting is that the ethnic identity of the suspected assailants — immigrant youths — was originally reported in the Swedish MSM, and then hastily changed. The article in Aftonbladet was rewritten so as to remove all hints of ethnic identity from the descriptions of the suspects.

A sanitized report of the event was published in The Local and included in last night’s news feed.

The blog Politisk Incorrect has an extensive account of the murder in Köpingsvik, including a screen dump of the original uncensored news story. Our Danish correspondent TB has compiled a report based on the blog post, which has been repeatedly updated. The results are below.

[A video stating that the murder could be racially motivated has been added to the top, but it is in Swedish.]

On the eve of Midsummer’s Day a fight between a Swedish and an immigrant gang ended with the murder of a 21-year-old Swedish man, who was knifed to death in Köpingsvik in the north of Borgholm. 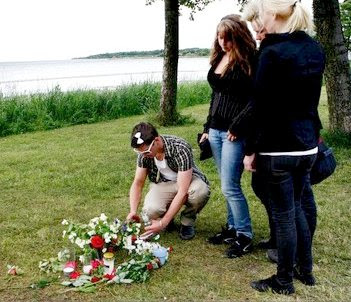 In just a few minutes another three were injured, a 17-year-old woman from Kalmar, an 18-year-old and a 20- year-old from Nässjö, all of whom received treatment at Kalmar hospital after the incident. The woman had surgery for injuries to her hand. All the injured were from the Swedish gang.

The charges were formalized as homicide and attempted homicide on the three surviving victims.

The police have made no arrests, but remain optimistic about solving the case.

“One of them looked like an African or maybe Indian and her friend has a southern European look,” police spokesman Ulf Karlsson says.

According to several of the young people the police have talked to, the women were with the perpetrators’ gang.

“It is likely that it all started because of the women, but they are not suspects. We are looking for them as witnesses.”

The police know that the two gangs met on the promenade at Gröndals campground. Several versions of what happened now exist.

“Some say that it all started when someone said something, others that it started because someone was pushed around,” Ulf Karlsson says.

The fact that so many were hurt makes the police think that there could more than one perpetrator.

The police found a knife soon after the incident and they believe it was the weapon that was used for the killing. Nothing else was found. But the police have photographed and monitored the identity of a lot of the youths who were present in the area. One who has done that is the motorcycle officer Fredrik Råberg.

“I have seen several persons who match the description of the perpetrators,” he says.

On the internet there are rumors that it was an immigrant gang who did this. But the police will not get into details about that.

SD [Sverigedemokraterna] politician was denied access to the press conference

Because of the rumors on the internet, Thoalf Alfsson from Borgholm arrived.

“I will participate in the press conference and listen to the journalists while they ask the police some tough questions. I want to know if they will let out a description of the suspects.”

But the police did not allow him to participate. They explained their decision by stating that the conference was for journalists only. The police are themselves aware of what has been written in different internet forums about the knife incident in Öland.

“On the internet there are many rumors about what happened and why, and maybe we will find this interesting ourselves,” Ulf Karlsson says.

Köpingsvik, north of Borgholm, is one of the places that attracts most youths at Midsummer’s Eve. In the gang who fought there were a total of around 30 persons. What started the whole thing the police do not know.

During Midsummer’s Day the police handed out posters about the incident to the youths at the camping place and interrogated members of the witnesses from the gang in their search for the guilty person.

Köpingsvik is popular among youngsters who want to party, and according to the police there had been a lot of drinking and fighting.

Daniel died of his injuries in the ambulance during his way to the hospital.

There follows another article that says the same, more or less, as the one that I have just translated. The headline states: “Ölandsbladet does not censor”, and shows how Ölandsbladet describes the ethnicity of the assailants.

Initially Aftonbladet wrote that there was an immigrant gang involved: 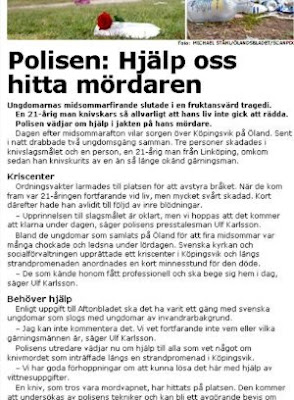 Police: Help us find the murderer:

The celebration of Midsummer’s Eve ended in a terrible tragedy.

A 21-year-old man was cut up so severely that his life could not be saved.

The police ask for help in their hunt for the murderer.

The day after Midsummer’s Eve sorrow lies over Köpingsvik, Öland. Late last night two gangs ended up in a fight. Three persons were wounded and one person, a 21-year-old from Linköping, died when he was stabbed by a still unknown assailant.

Guards were called to the crime scene. When they arrived the 21-year-old was still alive but badly injured. Shortly thereafter he died from internal bleedings.

“The reason for the fight is still unknown but we hope to find out what caused it later today,” press officer Ulf Karlsson stated.

Many of the young people who were present at the scene were in a state of shock and sadness during Saturday. The Swedish church and social services arranged for psychological help in Köpingsvik and a memorial service for the deceased was arranged at the promenade.

“Those who knew him have had professional help and are going home today,” Ulf Karlsson says.

According to Aftonbladet it was a fight between a Swedish gang and a gang of immigrants.

“I won’t comment on that. We do not know who the perpetrator or perpetrators are,” Ulf Karlsson says. Police are now asking for help from anyone who might know something about this incident.

“We are optimistic about solving this case with the help from witnesses.”

A knife thought to be the murder weapon was found on the spot. It will be analyzed by the police to find out if it can be important evidence…

It was not long before the text was changed to:

Another person says that he saw two persons running from the crime scene after the fight.

“It was two persons with very short hair who ran away. At the same time people were screaming that they were armed with a knife.”

Okay people, mail Erik Wiman and ask why the text was changed.

The blog post continues with some comments, which I have not translated. Then comes this:

Do you know who the perpetrators are?

The murder gang has to be identified and arrested. The Swedish gang was from Linköping but the murderers from the immigrant gang are believed to be from Norrköping, according to the police themselves.

Apparently there were 10 or maybe even 15 of them, of whom 4 or 5 participated in the fight. Whether it was only one of them who had a knife is unknown.

The blog Politically Incorrect wants to know as much as possible about who the perpetrator might be.

Name, age, number of actives, what knives they had, descriptions, ethnic belongings, cars, registration numbers. Everything that might be important.

We will collect it and send it to the police. If we get pictures we will publish them so that they can be caught.

To you who were there: Write a report including the background for the fight and the fight itself.

3 thoughts on “Murder on Midsummer’s Eve”