Only a few days after the D-Day WWII memorials, concerning which the Dutch blog GeenStijl paid tribute to American soldiers with an impressive photo-series, it has been made public that there will be a President Ronald Reagan memorial in London as tribute to freedom and the victory of the Cold War: a statue, a plaque, and a piece of the Berlin Wall.

From The Young Conservative:

London is to have its memorial to freedom after Westminster council granted full planning permission for a statue of Ronald Reagan outside the US Embassy in Grosvenor Square. The monument will, appropriately, feature a section of the Berlin Wall. At a meeting of the council the planning request met with unanimous approval, and the council waived its ‘minimum 10 years after death rule’ to grant permission. 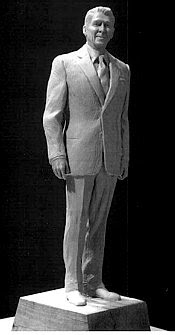 Steve Summers, chairman of Westminster City Council’s planning applications sub committee, said: “Regardless of politics, nobody can dispute that President Reagan was a true ally of this country.

“During his presidency the term ‘special relationship’ reflected not just the close working partnership of our respective governments, but helped reinforce Britain’s unquestionable cultural and historic ties with the United States. “Subsequent presidencies have continued that unique bond between our countries so it is only right and proper we exempt President Reagan, as a former head of state, from the usual rules on statues.”

The memorial to Reagan will also feature a section of the Berlin wall, reflecting his decisive leadership which brought the Cold War to a bloodless end and dismantled Communism in Europe.

Mr Summers added: “Those who witnessed the fall of the Berlin wall in 1989 described the feeling in the air that night as electric, as if some great force had been let loose and it is fitting we should pay tribute to Reagan’s contribution to bringing down this barrier between east and west, and subsequently changing the world.

“The site which houses the US embassy is a fitting place to acknowledge this great man.”

We understand that the Council’s decision is a victory for the Conservative Way Forward group who have been pushing for the erection of the memorial for several years. The application was formally made on behalf of “The President Reagan Memorial Fund”, by Mrs Jennie Elias, a CWF Executive member.

American Chas Fagan, who also crafted a statue of Reagan for the US Capitol, will sculpt the 10ft high bronze statue, which will stand on a circular 6ft Portland stone plinth; perhaps a fitting synthesis of British and American. Architects drawings and mock-ups of the statue can be viewed at Westminster Council’s website.

TYC’s Verdict: We look forward to the unveiling ceremony, and to London having a rallying point for freedom-lovers.

An afterword from VH:

The first comment underneath the GeenStijl article is [translated] “Can they please liberate us one more time?” and another: “Respect for the soldiers who fought and died there.” and “Very impressive, should never be forgotten, Respect, serious…” and “Thanks soldiers, for one of the best operations executed ever” and “Heroes” and “A big thanks to these men…” and “The biggest respect to these men (still boys then) as far as I am concerned this may be commemorated long after” and “These men are heroes, period!” and “Nothing but respect, for them. Thank you.” and many, many more comments like this.