Our Flemish correspondent VH has translated a news article about the first-ever attack on German policemen using poison gas. First his introductory note:

HetVrijeVolk.com reports in an article entitled “Media fairy tale — how Spiegel Online makes German police officers speechless” that many German police officers are not at all impressed these days with the online news magazine Der Spiegel. Because the editors have reported extensively on the Internet about a so called “police raid” on an African in the city of Heidelberg — but at the same time the remain persistently silent about the first-ever poison gas attack on the German police in the history of the Federal Republic. The attack caused injuries to 47 officers during the May 1 riots.

Police officer and member of the Police Union Torsten M. says: “With Der Spiegel they seemingly keep a stock of prefabricated enemy stereotypes. And when German police officers are attacked with poison gas (by left-wing anarchists), the editors of Dr Spiegel apparently think is not worth even one word. We police officers for the most part probably just have the wrong skin color, for what otherwise would be the reason for this persistent looking away by Der Spiegel?”

The Berlin Landeskriminalamt (LKA; Federal Bureau for Criminal Investigation) knew neither the gas nor the poison gas grenade — it was a novelty to the Berlin specialists. That is why a nationwide “information request” has been launched within other departments. Just have a look around on Internet: there is now one renowned Berliner daily that even posted a photo with the caption “Not only incendiary material, but also poison-gas grenades were thrown at the police in the May riots”.

Here’s the report from Morgenpost Online, as translated by VH:

Policemen attacked for the first time with a chemical bomb

During the Kreuzberg May 1 riots, the police were attacked for the first time with a novel chemical bomb. According to the police, the grenade exploded like a smoke-bomb, and then radiated a yellow, odorless smoke, that took 47 officers out of combat in just a few seconds. 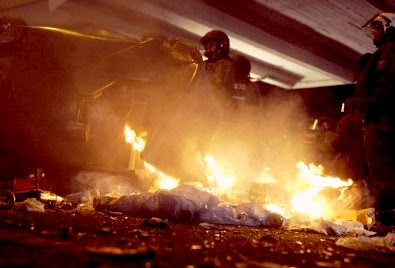 [Photo caption: “Not only incendiary material, but also poison-gas grenades were thrown at the police in the May riots”]

Morgenpost Online was told by security circles that the grenade was hurled towards the officers near the Kottbusser Tor Subway Station. “It first went off like these rather harmless fog grenades, as known from football riots,” says a policeman. In the immediate vicinity of the officers it quickly dispersed a “yellowish, odorless smoke”. This was inhaled by a number of his colleagues.

“A few seconds later, this substance apparently caused a loss of orientation for some officers,” the policeman continued. Some were only able to crawl, others had to vomit on the spot. Because of the complicated situation it was not possible to secure the burned out shell. Later on the object — despite intensive search — remained untraceable.

The Landeskriminalamt (LKA; Federal Bureau of Criminal Investigation) has now issued a nationwide call for information. “We are not aware whether there have ever been similar chemical attacks,” says the policeman from the LKA-7, “but we seek to collect information that we will help us when facing similar attacks.”

In the middle of last month, the public prosecutor levied about 20 charges against rioters. Nearly 350 offenders were arrested during “Walpurgisnacht” [May Day eve], and on May 1. There are ongoing investigations against 289 persons. “The allegations in most cases are of serious breach of the peace of the country, causing grievous bodily harm, and resistance against enforcement officials,” Michael Grunwald of the prosecutor’s office said. During the evenings of the riots, 479 policemen were injured.

For the first time four arrest warrants were issued to rioters for attempted murder. The suspects, aged 16 to 21 years, had poured flammable liquid over police officers [and were in the process of setting them on fire]. The police forces were totally surprised by the aggressiveness and the mass numbers of the rioters [left-wing extremists, mainly from “Die Linke”, the heirs of the ruling DDR Socialist party, Antifa and Autonomous, and immigrants—VH].

5 thoughts on “Gassing the German Police”