This was the face of Pro-Köln during yesterday’s Anti-Islamization Congress in Cologne: 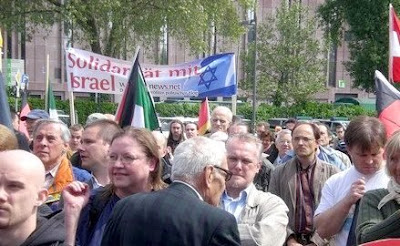 There’s more at Tundra Tabloids (the original source for the photo is Politically Incorrect).

And thanks to AMDG for this representative photo of the face of the other side: 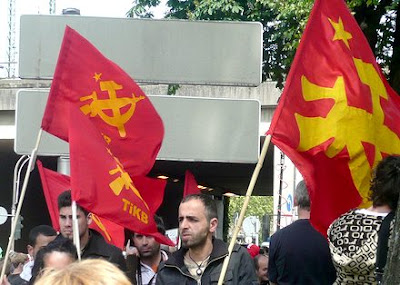 Observe the variant of the Soviet flag, in which the hammer is replaced with a rifle.

I wasn’t familiar with TiKB, so I looked it up. It’s the Türkiye Ihtilalci Komünistler Birligi (TIKB), or the Revolutionary Communists Union of Turkey. There’s not much about it on the web in English — this Wikipedia entry is in Turkish.
– – – – – – – – –
So that’s the strategic alliance opposing Pro-Köln: “anti-fascist” anarchists, hard core communists, Greens, and Muslims. 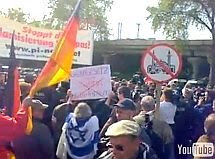 And what about the fanatical “racist neo-Nazis” of Pro-Köln? Where were their swastikas and jackboots?

I suppose they’re just being subtle and crafty, pretending to be ordinary citizens who want to preserve the norms and traditions of all Germans. They’re hiding their true designs behind a guise of reasonableness, but only until they gain power.

Then the mask will be off, and it will be “Jews to the gas” time all over again.

Oh, wait a minute. That’s a Hamas slogan. What was I thinking?

The European Left has no problem with Hamas. The “anti-fascists” and communists form a huge cheering section for these fellows: 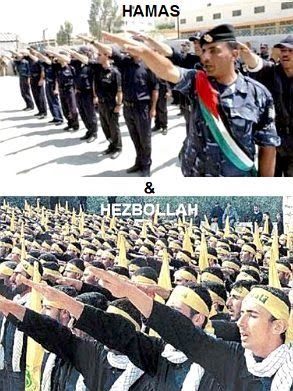 They’re not hiding anything. These guys are out in the open with their stiff-armed salutes.

4 thoughts on “The Two Faces of Cologne”