Heroyalwhyness sent us a photocopy of the following political cartoon, which was published on April 21, 1934, in the Chicago Tribune — just over seventy-five years ago.

It’s funny how the mistakes of history recur. Heck, this isn’t even a rhyming exercise: this is history xeroxing itself.

Just change the names and faces of the major players to upgrade your New Deal version 1934 to AmSoc 2009: 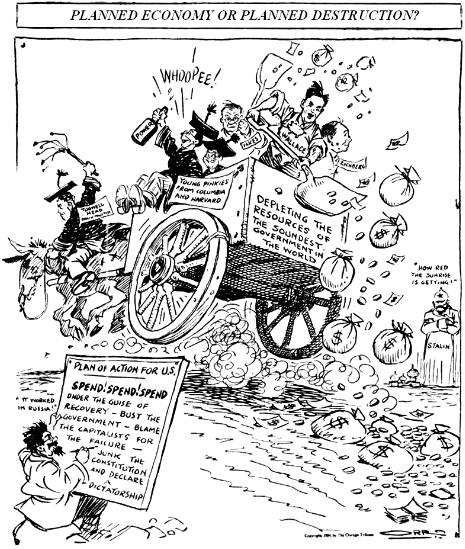 Spend! Spend! Spend under the guise of recovery — bust the government — blame the capitalists for the failure — junk the Constitution and declare a dictatorship

The sign on the back of the cart reads “depleting the resources of the soundest government in the world.” The professor with the flail riding on the mule is “[Rexford G.] Tugwell — Brain Truster”. Riding in the cart, brandishing a bottle labeled “Power”, are “young pinkies from Columbia and Harvard”, along with:

In the distance on the right stands Stalin, who says, “How red the sunrise is getting!”