I have so much material on my trip to Scandinavia that it will have to be broken up into several reports. The lengthy descriptive accounts will come later; tonight’s post will feature a travelogue with selected photos. 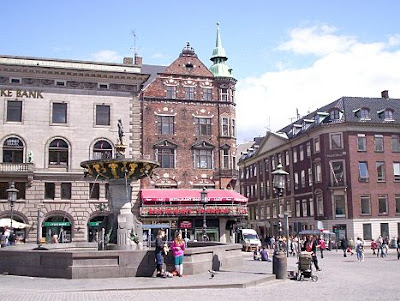 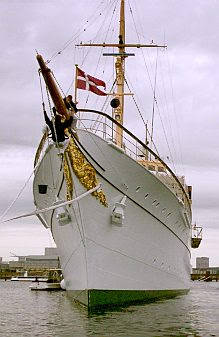 I arrived in Denmark a couple of days early. It gave me a chance to overcome my jet lag, and I took the opportunity to see the sights of Copenhagen. I’ll only use a few photos here; the rest will have to wait for another time.

Acting like a tourist for a change, I took a sightseeing boat tour of the harbor and the canals.

One of the more memorable sights was the royal yacht, which was being outfitted for the summer season. Queen Margrethe and her family use it to stay in contact with their subjects by visiting various ports and islands around the kingdom. 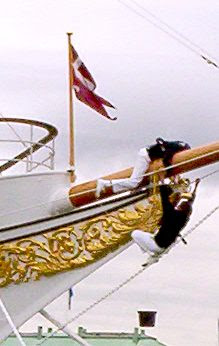 A pair of workman were cleaning, repairing, or painting the bow of the ship. One of them was straddling the bowsprit from above, and the other was clinging to it from below, supported only by a rope below him.

It was not a warm day, and I wouldn’t have had his job for anything.

On Friday, some of the meeting’s participants arrived early and took the train to Malmö to see what all the fuss was about. With the help of our Swedish contacts, we embarked on a safari that included the most important sights of the city.

One of the first things I noticed was a campaign sign featuring Mona Sahlin: 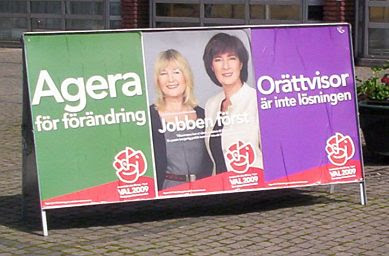 Ms. Sahlin is well-known to regular Gates of Vienna readers as a hijab-wearing Certified F**ker, not to mention one of Sweden’s most ardent spokescreatures for Multiculturalism. She is also a leader of the Social Democrats, and may become the next prime minister of Sweden if the SocDems regain power next year.

We passed through some normal-looking suburban areas before taking the turn for Rosengård. 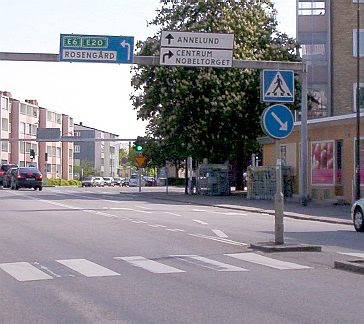 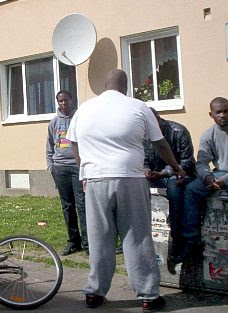 Rosengård is a large district with a number of neighborhoods and housing projects, some of which are notorious for their riotous and incendiary “youths”.

Youths were much in evidence, but since we toured the area during the daytime, they were restrained in their behavior. Life in Rosengård is relatively sedate until the sun goes down and the night is illuminated by the golden glow of gently burning tires and dumpsters.

Among the other famous sights of Rosengård are the “suicide balconies” of the apartment buildings. Festooned with satellite dishes, they are the scenes of recurrent tragedies: from the balcony railings young girls frequently and mysteriously fall or hurl themselves, often to their deaths.

From there we paid a visit Rosengård Centrum, a shopping center on an overpass that straddles a major traffic artery:
– – – – – – – – –

Adjacent to the Rosengård Centrum parking lot is a take-away restaurant, specializing in falafel, pizza, kebab, and other traditional Swedish delicacies.

Rosengård Centrum itself is a very culturally-enriched commercial establishment, but it is not uniform in its enrichment.

The northern section (“City Gross”) is a large store in which “persons of Swedish background” work and shop in addition to a modest number of Muslims. But the southern half (“Lidl”) is almost totally halal, a souk transplanted to Skåne from North Africa or the Arabian Peninsula. 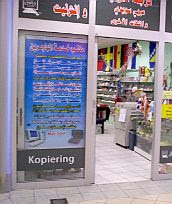 Inside the southern entrance the discriminating shopper will find a selection of Arab shops, restaurants, and other businesses.

A clothing store makes an offer to bargain-hungry customers: “Buy a Hijab and Get a Free Present”.

The advertising signs on the window of one establishment are entirely in Arabic.

The signs outside a hairdressing salon are also in Arabic. Notice that the smartly-coiffed models in the pictures on the window show only women in hijab, with the advertised hairstyles covered up by veils. How can a discerning customer be certain of what hair-do she will get?

Just beyond Rosengård Centrum is the Herrgården housing estate, which consists of several high-rise buildings and a number of garden apartments along Ramels Väg. 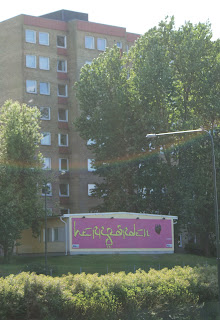 Visitors to Herrgården are greeted by a sign with the name of the estate presented in mock-Arabic script.

Just think of the implications: the municipal authorities of Malmö paid a professional agency to design and construct a sign which says, in effect, “This neighborhood is for Muslims ONLY.”

(Thanks to Aeneas for these two photos)

Herrgården is the site of the infamous nightly arson attacks, in which “youths” set fire to dumpsters, tires, and the occasional rental trailer from the nearby Shell station.

We drove up and parked by the Shell station, which stands at the junction of Ramels Väg and the main road. A large police presence was there, with several parked police cars and a number of officers just standing around their vehicles — presumably waiting for sundown and the nightly inferno.

The fire-damaged dumpsters are across the road from the gas station:

In the middle of the street are scars from the tire fires. We could see puddles of melted metal (possibly aluminum from the trailers) left over from the burning of other objects. 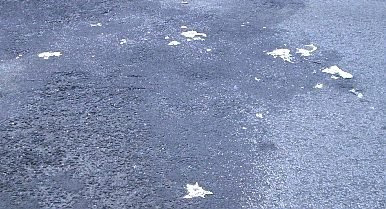 The place was quiet and calm, although groups of men in cars pulled up and kept an eye on us as we wandered around.

After we left Herrgården we went to look at the famous Jihad Driving School: 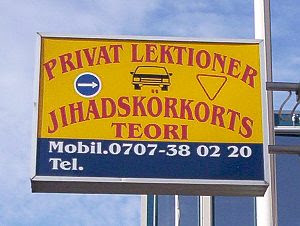 To be completely accurate, the “Jihad” in “Jihadskörkorts” is the genitive (possessive) case, and presumably refers to the name of the proprietor. That is, it says “Jihad’s Driving School”.

Next we paid a visit to Malmö Mosque, which was all but deserted: 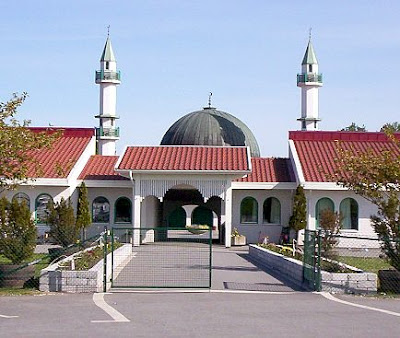 The mosque is far away from the Muslim housing estates in Rosengård. According to our Swedish guide, most of Rosengård’s Muslims worship at the “basement mosques”, and not the fancy one with the minarets paid for by Saudi money.

But there it stands, anyway: an assertion of political supremacy, claiming for the Ummah with its dome and minarets the sacred territory of Rosengård.

After we left the mosque in Malmö, we drove a few miles up the road to visit the ancient and beautiful city of Lund, where the lilacs behind the cathedral were in full bloom: 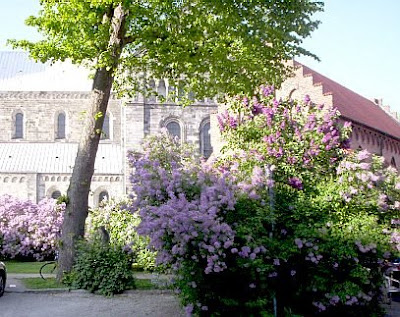 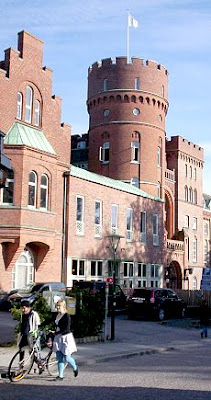 Our guide led us on a tour of the old town and the University, and we finished up by having a very haram dinner at an old restaurant just south of the Cathedral.

It was quite late by the time our group straggled back to the railway station in Malmö and took the return train to Copenhagen, where the hardiest among us gathered in the bar at the hotel for a nightcap.

Next: The Counterjihad Workshops

17 thoughts on “Counterjihad Copenhagen, Part 1: A Safari to Malmö”