For those of you who can read Italian, Bat Ye’or has published a new book, Verso Il Califfato Universale — Come l’Europa e diventata complice dell’ espansionismo musulmano (which I gloss as “Towards the Universal Caliphate — How Europe became complicit in Muslim expansionism”).

Andy Bostom has this report on his blog: 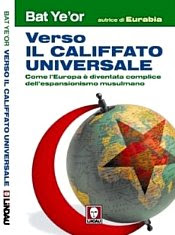 How “European Islam” Will Complete the Global Muslim Caliphate

Commenting to Paul Giniewski during an interview published in the journal Midstream from February/March 1994, Bat Ye’or had already observed that European Islam (pdf) was adhering to its traditional supremacist orthodoxy making no effort to eliminate doctrines incompatible with true ecumenism and core Western Enlightenment values:

I do not see serious signs of a Europeanization of Islam anywhere, a move that would be expressed in a relativization of religion, a self-critical view of the history of Islamic imperialism…we are light years away from such a development…On the contrary, I think that we are participating in the Islamization of Europe, reflected both in daily occurrences and in our way of thinking…All the racist fanaticism that permeates the Arab countries and Iran has been manifested in Europe in recent years…

Bat Ye’or’s seminal 2005 Eurabia — The Euro-Arab Axis elucidated the ideological underpinnings and resultant sociopolitical developments which had transformed Western Europe into a hemi-continent of dhimmitude. The fruition of this hideous utopian construct — Eurabia — is a Western Europe rife with Judenhass Anti-Zionism, Anti-Americanism, and a perverse, self-loathing denigration of its own Western heritage, firmly rooted in both Christianity, and the Enlightenment.

Her latest work, Verso Il Califfato Universale — Come l’Europa e diventata complice dell’ espansionismo musulmano, suggests what Charles Emmanuel Dufourcq (d. 1982), the great historian of Medieval European Islam, expressed concerned about more than 30-years ago, i.e., that historical and cultural revisionism might precipitate a recurrence of “…the upheaval carried out on our continent (i.e., Europe) by Islamic penetration more than a thousand years ago…with other methods…,“ is coming to pass, abetted by an effete, self-loathing Eurabian elite, who as far back as 1975 published their own journal, entitled — what else — “Eurabia!” (This publication was produced by the European Committee for the Coordination of Friendship Associations with the Arab World. Eurabia’s editor was Lucien Bitterlin, President of the Association of Franco-Arab Solidarity; the journal was published jointly by Euro-Arab associations in London, Paris, and Geneva.).

And even 50 years earlier, June 26, 1925, Aldous Huxley, who spent considerable time in North Africa, wrote in a letter to Norman Douglas

One winter I shall certainly go and spend some [more] months there [in Tunisia], about the time of the date harvest — tho’ I have no doubt that the site of the Arabs picking and packing the dates would be enough to make one’s gorge turn every time one set eyes on that fruit for the rest of one’s life…And to think that we are busily teaching them all the mechanical arts of peace and war which gave us, in the past, our superiority over their numbers! In fifty years time, it seems to me, Europe can’t fail to be wiped out by these monsters…

Alarmingly, a cadre of influential American policymakers have bought into the same corrosive ideology, put forth under the guise of “ The US Muslim Engagement Project,” (pdf) which pays homage to its Eurabian forbears, and their self-destructive United Nations (read Organization of the Islamic Conference) project, “The Alliance of Civilizations,” in this odious document, entitled, “Changing Course.”

Visit Dr. Bostom’s place for more information and source links, as well as a link to a (perhaps surprising) video inspired by the topic at hand.