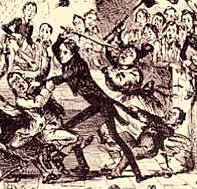 That’s how David Weigel views the conflict between Little Green Footballs and just about everyone else on the right side of the blogosphere. See his article, “Civil War Raging in Right-Wing Blogosphere”, in The Washington Independent.

Mr. Weigel interviewed Gates of Vienna for this article. He has quoted us accurately and in context, so it’s a relatively fair and balanced view of the whole sordid mess. He correctly identifies Counterjihad Brussels 2007 as the proximate cause of the Great Blog Schism — which continues even now, as Charles Johnson throws more and more enemies under the LGF bus.

The article allows Charles a lengthy say, but also quotes extensively from Robert Spencer and Pamela Geller. Below are a few excerpts:

Johnson is unapologetic about his actions. While he was attacking the attendees of the Counterjihad Summit, he was also blasting Rep. Ron Paul (R-Texas) for taking money from, and being photographed with, the owner of the extremist Web site Stormfront.org.

“Some people at that summit in Belgium were not people we should have been associated with,” Johnson said, pointing out that since 2007 the terrorism-focused conservative bloggers have become supporters of Dutch politician Geert Wilders, who wants to outlaw Islam in his country. [Note from BB: this is not true. Geert Wilders says he wants to ban the Koran as long as Mein Kampf is still banned in Holland. The author should have fact-checked this assertion.] “Some of these people outright want to ban Islam from the United States, which I think is crazy, completely nuts. That’s not something we do in this country. These people will outright defend banning the Koran or deporting Muslims. That’s popular with the Geller/Spencer crowd.”

“He’s really gone off the deep end,” Geller said, pointing to Johnson’s more and more frequent criticisms of creationists, such as the attack on the anti-evolution, Glenn Beck-inspired event, which made the host angry enough to lash out at LGF on his show. “He’s a leftist blogger now.”

Johnson brushes that criticism aside. “A lot of people think I discovered this creationism thing overnight,” he said, “but that’s not true. I was posting about this before 9/11. After 9/11 I had other things on my mind. And now I’ve come back to it.” But Spencer accuses Johnson of losing sight of the threat of extremist Islam by obsessing over the American religious right and equating the two faiths.

“There is no global movement of Christians trying to subjugate the world,” Spencer said. “There is such a movement on the extreme of Islam. I wrote a book called ‘Religion of Peace’ — which Johnson wrote a favorable review of — and I looked, and didn’t find, Christian extremists who were trying to replace the Constitution with Biblical law. They’re a myth. They’re the Santa Claus of the left.”

Some of Johnson’s former allies experienced a decrease in traffic numbers when he started attacking them, but they all now feel they’ve recovered from the break. “LGF tried to destroy my reputation so I wouldn’t have the access I have to my sources in law enforcement and academia,” said Spencer, “but that hasn’t happened.”

Geller has rebounded with increased prominence — she was a guest on the Fox News show “Red Eye” last week — and she said she has survived the “besmirching” of her reputation and she now fills the information-spreading role that Johnson once did. “I get my stuff from people on the inside,” she said, “from people in Europe. I field 800-900 emails a day. We all depend on our readers for these tips. That’s where Charles was getting his stuff. And now he’s cracked and he’s not getting that anymore.”

Johnson brushes off that kind of criticism. LGF is his site, and if it has to name names and shame the people who are debasing the movement against extremist Islam, he’ll do it. “I’ve definitely seen an uptick in craziness since the election,” he sighs. “Well, I don’t know if Geller got crazier. She always was nuts.”

Dymphna responds with her own remarks:

She was? In the past, before her trip to Brussels, Charles linked to Pamela. He accepted her praise and permitted her free access to the comments. When she was blindsided by his condemnation of her and struck back in anger, the vicious attacks against her character, her beliefs, and her integrity began.

Her attempts to apologize for her reactive anger were brushed aside.

The attacks continue to this day, as you can see if you peruse yesterday’s comments section for vicious slams against the sincerity of Pamela Geller’s Jewishness.

Charles dissembles when he claims to monitor his comments. The only ones he bans or criticizes are those who dare to go against his views.

If we had a penny for every email or comment from a disaffected ex-LGF reader or commenter, we’d have enough money to finance this blog for a year or two.

In any event, given the changes that others have noted in his position and demeanor since October 2007, it will be interesting to see what another year and a half brings.

Fortunately, he is not someone whose opinion matters anymore. Not that his behavior isn’t fascinating in a schadenfreude kind of way. So is a serious car accident. You come upon the scene, say a small prayer for those involved, and you keep driving, knowing there is nothing you can do.

14 thoughts on “The Gettysburg of the Counterjihad”