Lars Hedegaard is the president of the International Free Press Society. The following essay was originally published on Monday at the IFPS site. 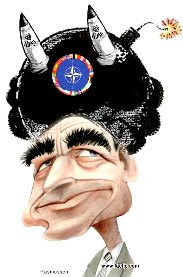 (COPENHAGEN, April 6, 2009) Expectations that something dramatic was in the offing ran high prior to NATO Secretary General Anders Fogh Rasmussen’s maiden speech in Istanbul Monday. Exactly what had President Obama and Mr. Rasmussen promised the Turks in exchange for their reluctant acceptance of the former Danish Prime Minister as the new chief of the Western defense alliance?

Would he or wouldn’t he climb down from his principled defense of free speech during the Muhammad Crisis in late 2005 and 2006 following the daily Jyllands-Posten’s publication of 12 cartoons depicting the prophet? Though the full text of Mr. Rasmussen’s Istanbul address is unavailable at the time of this writing, it appears that the answer is: Yes.

To the delight of the Turks, whose Islamicist leaders see themselves as the champions of a new Muhammadan caliphate, Mr. Rasmussen called for a balance between free speech and respect for religious feelings.

“I would never myself depict any religious figure, including the Prophet Muhammad, in a way that could hurt other people’s feelings,” the outgoing Danish Prime Minister said at a forum intended to promote the so-called Alliance of Civilizations, which is co-organized by Turkey and Spain.

He went on to say: “I respect Islam as one of the world’s major religions.”

This may sound like appeasement of the foes of free speech, but in reality Mr. Rasmussen said nothing new. As he himself pointed out, that had been his line all through the cartoon crisis.

“My position was clear before, during and after the crisis,” said the former P.M.

Far more interesting from a free speech perspective were some remarks quoted by the Danish press Agency Ritzau prior to Mr. Rasmussen’s Istanbul speech.

“Listen. In Denmark we do not apologize for having freedom of speech,” Ritzau reported him as saying.

“You all know that a Danish Prime Minister cannot apologize on behalf of a newspaper,” he continued.

The Turkish media had expected Mr. Rasmussen to apologize for the cartoons. According to the country’s largest newspaper Hürriet, the Turkish acceptance of the ex-Prime Minister’s NATO appointment had been made conditional on a climb down.

They must have been disappointed with what they got.

“We have nothing in the bag,” Mr. Rasmussen was quoted as saying.

It was also widely believed that Anders Fogh Rasmussen had promised the Turkish government to close down the Kurdish TV station Roj, which broadcasts from Denmark. It has long been a thorn in the side of the Ankara government for its outspoken defense of the Kurdish cause and is accused of having close ties with the Kurdistan Workers’ Party, or PKK. The party is fighting for a separate Kurdish state in eastern Anatolia and is considered a terrorist organization by many Western countries, including Denmark.

According to a one-time advisor to the Danish government, speaking on background to Internationalfreepresssociety.org, it is well known that the PKK finances its operations through drug smuggling. For several years the Danish public prosecutor has been investigating the potential links between terrorism, drug money and Roj TV, but has so far come up with nothing that will hold in court.

Speaking to reporters in Istanbul, Mr. Rasmussen could offer no assurances: “If sufficient evidence is provided, we will of course do all we can to close down this television station, but it’s up to the public prosecutor to decide,” he said.

It appears that the General Secretary’s Turkish balancing act had got the better of him. On the night before his speech in Istanbul he fell down the stairs and dislocated his right shoulder.

When Fogh Rasmussen mounts the podium in Turkey today, his arm will be in a sling after he fell down stairs last evening and dislocated his shoulder.

One thought on “New NATO Chief Tiptoeing Through Turkeystan”