Today’s Jyllands-Posten has an article about the cyber-attack on IFPS and the sale of prints Kurt Westergaard’s famous Motoon. As most of you already know, J-P is Denmark’s most popular daily.

The article is entitled “Hackers Sabotage Sale of Drawings”. I don’t have time to translate the whole thing, but after skimming it, it seems to be an adequate summary of the attack that brought down the International Free Press Society last week. It reports that the sale of the drawings is continuing, that IFPS believes that the attack will only serve to increase public interest in the fundraiser, and that the edition is almost sold out. There are quotes from Diana West and Kurt Westergaard, with the latter voicing his usual defiance against those who would suppress the right to free speech.

Update: Our Danish correspondent TB has translated the relevant paragraph:

Some American blogs have reacted in solidarity by bringing IFPS into their web-pages. This kind of ‘spreading the target’ makes the hacker’s task, who by intensive bombardments of bytes can cause a single target to break down, almost unmanageable. Among the temporary hosts one will find Gates of Vienna and Rightsidenews.com 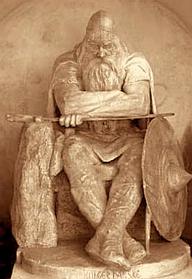 About halfway down the page you’ll see a mention of this blog.

Alas for us! Now we will never overcome the impression that Dymphna and I are Danes running a Danish blog that just happens to be written in English.

It’s hard to get out of the Viking cellar once you’re stuck in it.

6 thoughts on “Gates of Vienna in the Danish MSM”