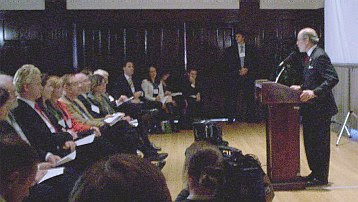 
The recent events in Washington D.C. have brought to the forefront the International Free Press Society and Geert Wilders’ call for an International First Amendment.

Freedom of speech is under attack in Europe, Australia, and Canada, and there are ominous clouds appearing on the horizon here in the USA — witness President Obama’s insistence that we must not only respect Islam, but speak respectfully about it. To those of use who are familiar with the OIC, this sounds suspiciously like the program proposed by Ekmeleddin Ihsanoglu.

So a stout defense of press freedom throughout the West is in order. But is the quest for an international equivalent of the First Amendment too quixotic to be worth pursuing?

As El Inglés pointedly asked, who will enforce such a law? The UN, which is already the principal engine of the “defamation of religions” restrictions on free speech? The EU? How about the OIC?

No one is seriously considering an internationally enforceable initiative guaranteeing freedom of speech. The point is to draw attention to the threat to our liberties, and to build support for the protection of free speech in individual countries throughout the West. Geert Wilders is calling for the repeal of all existing blasphemy laws and other restrictions on speech and the press, so that they cannot be used as excuses by Islam to further undermine our countries.

In any case, an international First Amendment is not really necessary, since the Universal Declaration of Human Rights — one of the founding documents of the United Nations — already guarantees freedom of speech:

Article 19: Everyone has the right to freedom of opinion and expression; this right includes freedom to hold opinions without interference and to seek, receive and impart information and ideas through any media and regardless of frontiers.

And we all know how well the UN enforces the UDHR in places such as, say, Cuba.

You’ll also notice that Article 19 guarantees the right “to seek, receive and impart information and ideas through any media and regardless of frontiers”. So Geert Wilders had a valid case against Britain based on Article 19.

The UN rushed to his defense, of course… didn’t they? 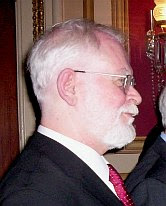 The International Free Press Society is the brainchild of Lars Hedegaard, the Danish author and historian. Drawing on the model of Trykkefrihedsselskabet, the Danish Free Press Society, he collaborated with a group of interested parties in the United States, Canada, and Europe to launch the IFPS. Geert Wilders, Robert Spencer, Mark Steyn, Roger Scruton, and Bat Ye’or are among the prominent freedom-loving writers on its advisory board.

Mr. Wilders strongly opposes the Islamization of his country — and the rest of the West — but the IFPS takes no official position on that particular goal. The organization is simply committed to a vigorous defense of Mr. Wilders’ right to speak out on this or any other topic.
– – – – – – – – –
Islam is inevitably mentioned in this context only because most Muslim countries resolutely oppose free speech, especially when criticism of Islam is involved. They have institutionalized their opposition to free speech via the Organization of the Islamic Conference (OIC), which now sets the agenda for the UN on human rights issues. In his talk on Friday, Geert Wilders correctly identified the OIC as the most significant danger to worldwide free speech.

We have chosen to fight Islam through the free press movement because that is where it is most vulnerable. Political Islam cannot stand up to close scrutiny. It is threatened by free and open inquiry, and that’s why it fights tooth and nail against any criticism of Islam, labeling it “Islamophobia”.

It’s “Islamophobia” for non-Muslims to quote the Koran, unless they stick to the approved suras, such as the one about there being “no compulsion in religion”. Fitna is “Islamophobic” and defamatory of Islam because it quotes the violent and hateful suras — of which there are many — and exposes the core doctrine of Islam for what it is: a totalitarian political ideology with a mandate from on high requiring it to be spread by murder, slavery, intimidation, and deceit.

To fight for free speech is to fight to tell the truth about Islam. This will force the West — which purportedly believes in liberty — to confront the magnitude of the threat it faces.

As Mr. Wilders pointed out, most Muslims are peaceful and law-abiding, and are also largely ignorant about the hateful doctrines that lie at the core of their faith. Allowing them to experience the unfamiliar benefits of free speech will reduce the appeal of Islam and encourage apostasy.

Salafist doctrine can only spread in the shadows. When it is exposed to the light, it scuttles back under the refrigerator and waits for the darkness to return.

Our job is to keep the light on.

Our duty is to call for free speech for everyone, everywhere, under all circumstances.

No matter how insulting and offensive the results, free speech and freedom of the press are the key.

Radical Islam will shrivel when we are free to confront it with the truth.

4 thoughts on “Why Freedom of Speech?”