A Gates of Vienna reader named Gryffilion sent us this movie review. We don’t get out to the movies very often, so posting a review of one counts as a vicarious thrill. 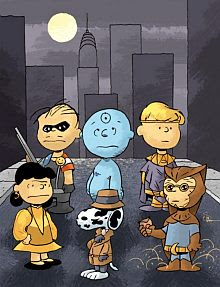 This weekend, I had the misfortune to watch the film adaptation of the famous graphic novel The Watchmen. It was a movie I had every intention of enjoying — the trailers looked fantastic and everything pointed to it being a thrilling, if gruesome, ride through yet another untapped franchise. Sadly, it proved to be nothing more than a pretentiously dark and high-mindedly nihilistic piece that would be more forgettable if its images weren’t so pervasively disturbing.

This abominably empty film is set in an alternate 1985 during which Richard Nixon is serving his fifth term as president. How exactly he got Congress to repeal the 22nd Amendment is never explained, but don’t let’s fret our pretty little heads about that. American scientists and military leaders have put together a Doomsday Clock which counts down towards inevitable nuclear war with the Soviet Union. (The method by which the clock is turned towards Midnight — Mutually Assured Destruction — is another plot device left maddeningly unexplained.) Former superheroes, hamstrung by a bill (the Keane Act) which prohibits anonymous vigilantism, have turned reclusive, like the terminally nice Nite Owl/Daniel Dreiberg, or gone rogue, like the raspy, violent Rorschach/Walter Kovacs. All in all, it is — was — a nice set-up for a grimy crusade through a Gothamesque New York, with the idea of superheroes made obsolete providing the bittersweet leitmotif.

However, it all goes downhill pretty damned fast as we find out more about superheroes past and present:
– – – – – – – – –
The aging Comedian, thrown out of his apartment window in the first scene of the movie, is revealed to be a sexually and physically abusive, murderous scumbag who began working for right-wing nationalist third-world governments (the worst kind) after the Keane Act restricted his ability to beat up on hippie scum with impunity.

Rorschach was designed by his writers (both film and print) to be a “realistic” interpretation of what a Batman-type character might have turned out like — sociopathic, merciless, scornful of the very people he allegedly protects.

The Silk Spectre is an aging, promiscuous lush living in a retirement home, and her daughter, the Silk Spectre II, has basically no other purpose than to be The Girl Superhero. Jokes are made about her latex costume, but they would ring truer if said outfit were less ridiculously revealing in the most stereotypical way imaginable.

Dr. Manhattan has been stripped of his humanity by a scientific accident that left him gigantic, blue, and imbued with godlike powers; however, his bald pate and robotically tormented demeanor evoke images of a fretfully indecisive Charlie Brown.

Dan Dreiberg, as the Nite Owl, comes close to being a sympathetic character. Like the rest of the movie, however, he tries too hard and ultimately fails, often sounding less like a retired superhero struggling to find his way in a world that doesn’t want him and more like a parody of Jughead saying “Aw, jeepers!”

That’s the rub of this entire movie — the world doesn’t want its superheroes. And who would want this motley crew, anyway? All of them are fascistic embodiments of the ultimate abusive parents — brutalizing and beating the people who supposedly look to them for protection, and then bitterly lamenting the fact that hey aren’t loved and idolized. The graphic portrayals of violence reach several ham-fisted climaxes throughout the movie. One scene in an alleyway that results in Nite Owl and the Silk Spectre II maiming or killing an entire Asian street gang was probably intended to be balletic and artistic, but instead comes across as embarrassingly pornographic, and raises the question of whether violence is just another form of foreplay for these purported superheroes.

I could go on for hours about the ways in which this movie displays an apparent contempt for humanity. Out of all of them, however, I was the most disgusted by the lack of any characters with whom we can empathize. One of the “heroes” is murdered, quite violently and graphically (and in the least subtly ironic way possible), towards the close of the movie, and I found myself thinking that I cared as little about his death as I would about the death of pretty much any of the rest of the main cast. My sympathies, such as they were, lay with the Unnamed Public, on whom the unasked-for “protection” of these “heroes” was foisted the way similar “protection” was foisted on Chicago shopkeepers by the mob.

Attempts to make the surviving main characters more likeable and human are much too little and far too late, and come across as implausible and forced. The Silk Spectre, justifying her rape and impregnation by the misogynistically violent Comedian, says to her daughter and successor, “I can’t hate him for what he did because he gave me you.” In a movie as devoid of the milk of human kindness as this one, one can only assume that some hack assistant writer got his scripts mixed up. It’s less insulting to our intelligence as viewers than assuming the directors and producers thought we’d buy such a mawkish line after having pure, distilled nihilism shoved down our throats for almost three hours.

It is necessary to pause here and answer the unheard-yet-foreseen voices, crying out in indignation that while everything I’ve said is true, my arguments are rendered moot by the fact that the writers of both the graphic novel and the movie set out to do just what has been described. It’s just like every other apocalyptic story: create a terrifying future by turning an established norm (in this case, the superhero as a projected ideal of human virtue) on its head (the superhero as a fascist enforcer of Order at any cost). To which I would reply: if you set out to make a salad out of broken glass, garbage, and the tears of infants, you still have a depressing meal that no one wants to eat. Even if it’s the BEST salad made out of refuse and lachrymation, and moreover made in an ironic way.

Somewhere in the interminable middle of this movie, the Keane Act-flouting Rorschach is framed for murder and put in prison. He ends up foiling an attempt on his life by savagely beating and dumping hot grease all over an inmate who tries to stab him. As the guards drag him away, he yells “You all don’t understand! I’m not locked up in here with you! You’re locked up in here with me!”

And later on, when he is freed, the entire world is locked up with him. We are left to ponder the question: with heroes like these, who needs villains?

33 thoughts on “Who’s Watching “The Watchmen”?”