A United States senator has introduced a bill that would bail out the nation’s newspaper industry, which has fallen on unprecedentedly hard times. It’s an idea that makes sense: given the symbiotic nature of the media and the current administration (and the permanent bureaucracy), nationalizing the newspapers is the perfect way to ensure that they do not lose their status as the monopoly mouthpiece for the leftist intelligentsia.

Here’s how it will work: instead of a “bailout”, the papers will be converted to non-profit tax-exempt entities. They’ll be like print versions of NPR — and we all know how fair and balanced NPR is.

The only restriction is that they no longer will be able to endorse specific political candidates. That shouldn’t slow them down much — after all, has anyone ever doubted which party NPR supports in any given election?

“Wait a minute, Baron,” you say, “they’ll just be tax-exempt — that doesn’t mean the government will be paying for them.”

Ah, yes, that’s what they’d like you to believe. But remember: once they become non-profits, they’ll be eligible for… government grants!

And do you think the feds will actually turn Pinch Sulzberger down when he comes to them, cap in hand?

Anyway, here’s the story, according to Reuters:

WASHINGTON (Reuters) — With many U.S. newspapers struggling to survive, a Democratic senator on Tuesday introduced a bill to help them by allowing newspaper companies to restructure as nonprofits with a variety of tax breaks.

“This may not be the optimal choice for some major newspapers or corporate media chains but it should be an option for many newspapers that are struggling to stay afloat,” said Senator Benjamin Cardin.

A Cardin spokesman said the bill had yet to attract any co-sponsors, but had sparked plenty of interest within the media, which has seen plunging revenues and many journalist layoffs. [emphasis added]

I’ll bet the journalists are interested. This will make them quasi-wards of the state. They can keep on doing what they always have done before, only this time as a part of the Quango Cloud. What more could anyone ask for?

Cardin’s Newspaper Revitalization Act would allow newspapers to operate as nonprofits for educational purposes under the U.S. tax code, giving them a similar status to public broadcasting companies.

Under this arrangement, newspapers would still be free to report on all issues, including political campaigns. But they would be prohibited from making political endorsements.

Advertising and subscription revenue would be tax exempt, and contributions to support news coverage or operations could be tax deductible.

Because newspaper profits have been falling in recent years, “no substantial loss of federal revenue” was expected under the legislation, Cardin’s office said in a statement.

In other words: newspapers are so unprofitable they might as well be government enterprises!

They’re too small to fail!

Once this deal goes down, they’ll be losing money at Amtrak levels.

“We are losing our newspaper industry,” Cardin said. “The economy has caused an immediate problem, but the business model for newspapers, based on circulation and advertising revenue, is broken, and that is a real tragedy for communities across the nation and for our democracy.

It’s a tragedy that newspapers are doing such a poor job of conveying information that no one wants to read them anymore. It’s tragic that the lumpenproletariat are too stupid to buy into the journalists’ view of current events.

The newspaperman as tragic hero: “To be or not to be, or maybe to land a subsidy — that is the question.”

In recent months, the Seattle Post-Intelligencer, the Rocky Mountain News, the Baltimore Examiner and the San Francisco Chronicle have ceased daily publication or announced that they may have to stop publishing.

In December the Tribune Company, which owns a number of newspapers including The Baltimore Sun, The Chicago Tribune and The Los Angeles Times filed for bankruptcy protection.

Now, to me, this is good news. Let the scythe of the market cut down the decayed behemoths of the legacy media. People don’t read them, so why should the taxpayer support them?

Because the government knows what’s good for you, that’s why.

Our daily papers will become just like Pravda and Izvestia were back in Soviet days, only less interesting.

And not just the writers: consider this little gem of a “political” cartoon by Pat Oliphant from The New York Times. It’s worthy of Al-Quds Al-Arabi: 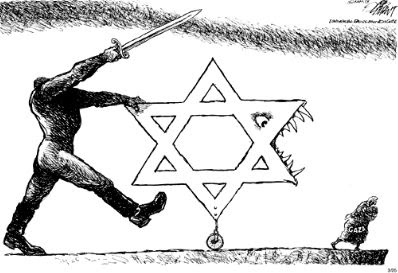 If Senator Cardin has his way, the above work of art will represent Your Tax Dollars at Work.

13 thoughts on “There’s no Pravda in Izvestia”