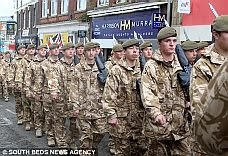 Twice in two years they have fought in Iraq. Twelve of their regimental comrades paid the ultimate price there and in Afghanistan.

Over the past two years they have spent day after day patrolling hostile territory, where every passer-by could have a gun or a bomb.

So the 200 men of the 2nd Battalion Royal Anglian Regiment perhaps had a right to expect a heroes’ welcome yesterday on a homecoming parade through Luton.

And despite the headlines and the MSM spin, they did receive a warm welcome from their fellow countrymen as they marched through town.

Yes, the predictable Muslim riff-raff, their degraded culture in full display, were on hand to muffle the joy of return, but they didn’t succeed. You have only to look at the pictures of regular folks on the streets to know that these boys – no, these men – were being welcomed home most heartily.
– – – – – – – – –
There are lots of pictures at the site. I recommend scrolling down, looking at the pathetic Muslim women huddled by themselves in their cloaks of mourning. What woman wouldn’t mourn her fate at having to dress like that? At having to live like that?

Look at the shot of the hate-filled dead eyes of the three men standing by themselves, especially the one in black on the right, next to the man with the camera.

Not everyone made it back. It was respectful of the Daily Mail to pay their respects by putting up the photographs of the fallen soldiers. And I’ll bet it was the ones who can’t return that were on the minds of those who marched so tall through the streets of Luton.

We who are left, how shall we look again
Happily on the sun, or feel the rain,
Without remembering those who went
Ungrudgingly, and spent
Their all for us, loved, too, the sun and rain?

A bird among the rain-wet lilac sings
But we, how shall we turn to little things
And listen to the birds and winds and streams
Made holy by their dreams,
Nor feel the heart-break in the heart of things?

How to return, indeed, when you know the heart-break in the heart of things…