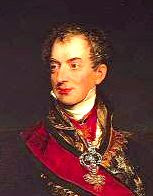 Klemens Lothar Wenzel, Prince Von Metternich, became Foreign Minister for the Austrian Empire in 1809. For most of the next forty years he was the diplomatic genius of the European political scene, dominating Continental affairs for the first half of the 19th century the way Otto Von Bismarck dominated the second half.

Metternich’s crowning achievement was the Congress of Vienna in 1815, which redrew the map of Europe after the departure of Napoleon and created a stable system that lasted for more than thirty years, until the revolutions of 1848.

The map of Europe was much more finely divided in those days, and Metternich had to juggle an incredible complexity of states, monarchs, dukes, princes, and territorial associations. By all contemporary accounts, he handled such tasks with tact, finesse, and a calm urbanity which managed to persuade acrimonious neighbors to reach accommodation with one another. The territorial adjustments were immense — the Kingdom of the Netherlands was created, various new pieces of territory were annexed to Austria, and many other pieces of the European jigsaw were put into place.

It brings to mind Al Stewart’s song “League of Notions”:

The difference between 1815 and 1919 was due to ideology (or the lack thereof). Metternich’s unabashed goal was to balance the interests of various European powers while advancing those of Austria. But in 1919 at Versailles the Allies were purportedly acting out of the highest altruistic motives: national self-determination and democracy were the order of the day, and war would be abolished forever by the League of Nations.

We all know how that turned out.

I bring up Prince Von Metternich because of a discussion in the comments on Dymphna’s post about the UN. Everyone involved agreed that the UN is corrupt sinkhole and an abject failure. But Henrik Ræder Clausen also had this to say:

We need a new [alternative to the UN], strictly dedicated to democracy, civil liberties and the upholding of division of state and religion.

It would only go the same way as the League of Nations and the United Nations. Competitionless, bureaucratic entities of this kind naturally degrade into corruption.

John McCain’s proposed “League of Democracies” or some other alternative would be no different. I think it would be best to do away the United Nations and replace it with nothing.

As appealing as Henrik’s idea is, I have to agree with Mr. O’Phobe.

After all, the UN was “dedicated to democracy, civil liberties and the upholding of division of state and religion”. It still is, if you believe the text of its charter. The same was true of the League of Notions.

Why would a new organization — “The International Alliance of Democracies”, or whatever we choose to call it — be any different?

Why do we imagine that we could succeed where our forebears failed so abysmally?

An uncomfortable truth is at work here: enormous high-minded transnational institutions don’t work, because they can’t work. They are created in an attempt to wish away human nature.

And human nature is a stubborn thing.

Human beings in large groups do not act according to idealistic concerns. Their actions are governed by the brokering of interests among the collective participants. This happens regardless of the altruistic ideals that ostensibly guide the actions of the principal players.

Any institution that pretends otherwise — that asserts that it functions solely out of high-minded purposes — will inevitably devolve to a combination of corruption and totalitarianism, since it will not overtly be able to broker the interests of the powerful groups involved.

The underlying dynamics remain unchanged, but the process of their resolution must of necessity remain secret. Powerful groups will still run international affairs, but they will have to conceal what they do in order to make the pretense of disinterested altruism.

It is a recipe for disaster, as has been amply demonstrated.

We have avoided a cataclysmic war since 1945, and many people attribute this success to the United Nations. But how do we know that’s true? We have no control group to compare it with. The UN has in fact encouraged continuous low-level conflicts among secondary and tertiary powers by insisting on blockading the natural course whereby states act to preserve their interests.

Its actions concerning the Middle East may well usher in a cataclysm to make World War Two pale in comparison. Yet a balance-of-power approach might have long since resolved the crisis, and with much less bloodshed than we will eventually face.

The actions of the League of Nations guaranteed that the Great War would be resumed, and helped make it even worse than it would have been otherwise.

The United Nations has delayed the reckoning of thousands of conflicts, great and small. However, the horrendous financial collapse that we are about to enter will allow these conflicts to sort themselves out at last, and if we are lucky only a few million people will die as a result.

The Metternich-style balance of power system was a much better idea.

Unfortunately for the denizens of the 21st century, the modus operandi of Metternich (or Bismarck) is no longer feasible. For good or ill, we are stuck with high-mindedness as the publicly avowed motivating principle for international action, at least until the coming collapse forces a new order on us.

Part of the problem lies with the United States, which is unable to manage international affairs from a “competing interests” standpoint, because the propositional nature of our system commands us to view the world through our own rose-tinted idealistic glasses.

But that can’t be the entire explanation, because the architects of the Treaty of Versailles and the League of Nations included the major Western European nations, and the United States never even signed on for the League. The botch job from 1919 to 1939 was mainly due to the European powers, and the “end of war” was a popular European notion.

Western Europe was every bit as susceptible as the USA to the siren song of international idealism.

So what was different in Metternich’s time? Why could he do what became impossible a century later?

For much of the 20th century, historians wrote Metternich off as cynical and opportunistic — as indeed he was.

Bismarck made similar calculations for the German Empire. Both leaders represented their emperors in such a way as to advance their nations’ interests, and in doing so they furthered the cause of peace.

The two giants of 19th century Europe sat atop a system of hereditary monarchies which allowed enough representative government to maintain public support. Regardless of any cynicism and opportunistic behavior, it was generally accepted that God ordered the world so that kings and princes ruled, subjects obeyed, and nations prospered. Deviation from this natural order was dangerous — as the all-too-recent examples of Robespierre and Napoleon amply attested.

But their world is now gone. God is dead, as far as international statecraft is concerned. The ambitions of politicians are now unchecked by anything higher than themselves.

They maintain the pretence of international law. They support every high-minded ideal. Yet corruption flourishes, oppression rages unchecked, and violence is only countered when it serves the secret interests of the great powers.

The millions of corpses piled up in Rwanda, Darfur, and Cambodia are a mute testament to the effectiveness of the international world order.

“By their fruits ye shall know them.”

By its fruits, the United Nations is a dreadful bane upon the peoples of the world.

We would be better off without it, and we need no replacement.

13 thoughts on “Bring Back Metternich”