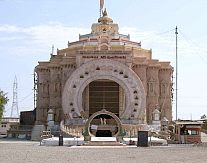 Back in 2005 I touched briefly on the destruction of a Hindu temple in Ayodhya by the Moghul emperor Aurangzeb. The desecration of Ayodhya was part of a vast project of devastation and massacre perpetrated by the Muslim invaders upon the Hindus, Buddhists, and Sikhs of India over a span over several hundred years.

The legions of the Prophet cut swaths of destruction across the Hindu heartland in the 14th, 15th, 16th, and 17th centuries, destroying temples, carrying off booty, and massacring millions of infidels. The mujahideen heaped up literal mountains of skulls in their pious zeal. They enslaved those whom they did not kill, and destroyed the magnificent sacred architecture and art of Hindu civilization that lay in their path.

Considering the Indian treasures that managed to survive the Muslim onslaught, it is heartrending to contemplate what was lost, since what remains is only a fraction of what once was. This deliberate wanton destruction of a civilization was not a byproduct of greed: it was the very purpose of Islam itself. Mass murder of infidels and the destruction of all “idols” remain the primary function of pious Muslims when they are unencumbered by any external restraints.

The enormity of India’s struggle against the Great Jihad is daunting for a Westerner to come to grips with. The consequences that befell India in the wake of the Islamic juggernaut exceeded those of any European country by at least an order of magnitude. And the struggle continues to this day: the Muslim population of India is currently eight to ten times larger than in the whole of Europe, and is growing relative to India’s other ethnic groups.

So I’m grateful that Dharmaveer at Thoughts of a nationalist Indian has agreed to post a series of articles about the Muslim invasions of India. In a recent post he outlined the history of Ayodhya,

To the western world, an iconic image of Islamic aggression is the conversion of the Hagia Sophia — Eastern Christendom’s greatest church — into a mosque by the Ottoman Sultan Mehmet. It was his first act upon entering the conquered city of Constantinople (now Istanbul) in 1493AD.

It is relatively unknown in the western world that a mere 35 years later, in 1528AD, his fellow Turk — Zahir ud-din Babar, the founder of the Moghul empire in India, and a descendant of Tamerlane — demolished one of Hinduism’s greatest temple complexes, and erected a mosque in its place, which is known in India as the Babri Masjid (Babar’s mosque).

It is the purpose of this article to give my western readers a glimpse into this act of destruction, and to provide further evidence of the compulsive aggression and profanity of Islam.

Through the centuries of brutal Islamic rule over India, tens of thousands of Hindu temples were destroyed and mosques built at their sites. In northern India, which was under Islamic rule for a longer period of time, hardly any temple has survived the Islamic period. Among the temples destroyed were the 3 greatest temples of Hindu Dharma — those dedicated to Shri Ram, Shri Krishna, and Shankar, at Ayodhya, Mathura, and Benaras (Varanasi), respectively.

Muslims kept fairly accurate accounts of their temple demolitions, since they considered them acts of great piety. By destroying the temples of the “kufr”, they were doing Allah’s bidding, and imitating Muhammad, who himself had destroyed all the idols in the Kaaba and made it into a mosque. Muslim rulers throughout history have repeated this act. The West knows of the conversion of the St. Sophia in Constantinople into a mosque. Hindudom knows of thousands of such tragic instances.

Given below are some of the accounts left by Muslim historians of the destruction of the Ram Janmabhoomi temple in Ayodhya — one of the greatest temples of Hindu Dharma. We will never know its splendour, but judging by the temples of South India that did survive Islamic rule, it must have been a stupendous feat of architecture.

The earliest of such authors is none other than the granddaughter of the Moghul emperor Aurangzeb. Many of these Muslim writers were residents of Ayodhya (Awadh) and some were eye-witness to or participants in the Hindu-Muslim clashes that resulted from the numerous (77 recorded) attempts by Hindus to regain control of their holy site. Muslim records state that over 100,000 Hindus, over the centuries, perished in attempts to regain the temple.

Let us now see what the Muslim writers have said…

Dharmaveer goes on to quote in some detail the accounts of various Muslim historians concerning the destruction of temple in Ayodhya and the building of the mosque that replaced it.

He says, in conclusion:

It is this Babri mosque, built as a symbol of the subjugation and humiliation of Hindus at a spot they venerated so highly, that was damaged by a crowd of Hindus in 1992 at the height of the nationalist movement to rebuild a temple for Shri Ram at the site which had been venerated as his birthplace by Hindus for millennia.

Islam deliberately destroyed and desecrated what was most sacred to Hindus, and replaced it with a symbol of Islamic victory. The same reason Sultan Mehmet converted the Hagia Sophia into a mosque.

Go over to Thoughts of a nationalist Indian to read the rest.

The importance of the Indian front in the current conflict cannot be overemphasized. Dharmaveer’s desire to build bridges between his country and the rest of the West is commendable.

India is the natural ally of all those countries and cultures that lie in Islam’s crosshairs.

6 thoughts on “Destruction and Desecration in Ayodhya”