Nobody can offend like the godless post-modern European kuffar. A brief reminder from GeenStijl, as translated by our Flemish correspondent VH, of why Germany and the Netherlands rival Denmark as Infidel Cesspools that Grievously Offend Muslims:

Put God in the loo. Nail the Prophet to the cross. 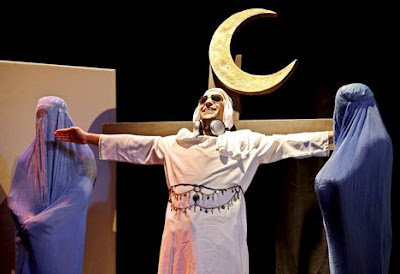 Offending during Carnival as it should be done. And because it can be done. In Germany they know how to deal with weeping believers who can’t appreciate a little satire at the traditional citizens’ party. Caption: The actor playing the role of Mohammed is nailed to a cross during the dress rehearsal of the parody Immigrantenstadl [immigrant-barn] in Cologne, Germany, 29 January 2009.This slightly different carnival session, ‘made by immigrants for all the world’, premieres on 30 January.

The 30th of January has come and gone. I wonder whether the Muslim Street has risen up as one over the infamy in Cologne…?

3 thoughts on “Cologne Offends Everybody”