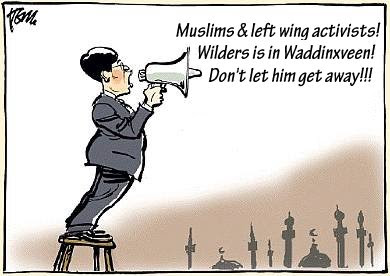 After being given the old heave-ho from Blighty, Geert Wilders has returned to his homeland, where he remains a thorn in the side of the Balkenende government. According to Spits Nieuws, as translated by H. Numan:

The city of Waddinxveen will close a street in which Geert Wilders will attend a meeting.

The PVV leader will speak to a group of supporters in a meeting hall. For fear of disturbances the city decided to lock down the neighborhood. There is a big chance that outside the meeting hall an anti-Wilders manifestation will take place. Opponents already announced as much.

What is it about this offensive, extremist, repugnant Dutch politician that provokes such a vehement response on the part of his opponents? How could anybody in the Netherlands ever vote for him?

Well, there must be a lot of closet extremists in the Netherlands, because the Party for Freedom (PVV), Geert Wilders’ party, has moved into second place in the latest opinion polls, and would capture 25 seats (out of 150) in the lower parliamentary house if an election were held today. This may not seem like much, but in a European parliamentary system with a field of nine parties, it’s a major achievement.

Politically speaking, by turning him back at Heathrow, Her Majesty’s government did Mr. Wilders a big favor.

These are the parties as represented in the above graph:

PVV on 25 seats in the polls after the British refusal

If there had been elections for the Lower House today [Feb. 15] in the Netherlands, Geert Wilders’ PVV [Party for Freedom] would get 25 seats [at the moment they have 9 seats]. This would be just two seats less than the CDA [Christian Democrats, the party of PM Balkenende and Justice Minister Ernst Hirsh Ballin and foreign Minister Maxime Verhagen] and two more than the PvdA [Socialists, Labour].

The main reason for the growth in popularity may be the decision of the British Government to deny access to Geert Wilders to the country out of fear of an uprising of angry Muslims. The PVV leader would supposedly incited hatred with his film “Fitna”.

The coalition government of Balkenende [Christian-Socialist Cabinet] continues to decline in popularity. The government parties CDA, PvdA and Christian Union won in the election in 2006 with a majority of eighty seats; now they do not go beyond 55 [out of 150].

Because the opposition parties VVD (19 seats) [Liberals], SP (17 seats) [Socialists, the party of the Hamas supporter Harry van Bommel] and D66 (17 seats) [left-wing appeasers’ party] reach the level of the Government parties, a coalition would be no longer be possible that would have more than 75 seats, the minimum to govern.

It must give Prime Minister Balkenende severe indigestion to stand behind Geert Wilders in his confrontation with the British government. However, that’s what he has been forced to do — after all, the Dutch government reserves the sole right to abuse Geert Wilders, and will not concede that sovereign privilege to any other nation.

Also from Elsevier, as translated by VH:

Wilders today demanded that Balkenende act now, and said that the Prime Minister had to act first before Wilders attempts to appeal against the British. Now the ball back to Balkenende Wilders made.

Balkenende [who wants to become the next president of the EU and doesn’t want to ruin his chances] responded: “If he wants, he must go to court.”

Balkenende said after the Cabinet meeting that the government was “very disappointed” with the British decision.. He called his British colleague because he himself “had the need to discuss what happened.” The Prime Minister said he would have preferred that Wilders had simply been admitted to the United Kingdom. “Brown has put forward his arguments and I have put forward the Dutch arguments.”

Balkenende did not call Brown before Wilders’ departure to London, because the Dutch position on Tuesday was already “crystal clear” as put forward to the British by Minister Maxime Verhagen (CDA) of Foreign Affairs [Verhagen “regretted” the decision, and had urged the British Embassy — not Foreign Affairs Minister Milibrand —to review it].

12 thoughts on “A Thorn in Their Side”