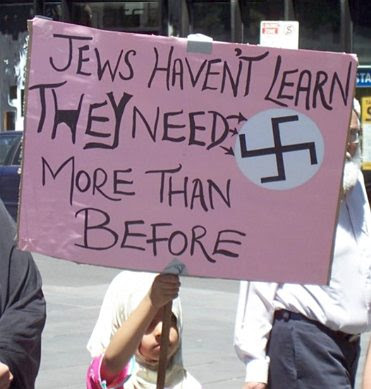 I’ve not seen the news reports yet from today’s rally in Melbournistan, but I do have a few pics here.

From what I hear, the MSM are saying around 12,000 people, but I can tell you now that is a complete crock of the proverbial.

There would have been a few thousand — 3,000 max, if you ask me. The fact that we could wander through the crowd at the State Library for the beginning of the march indicates that much.

It was a far from pleasant Sunday afternoon, but one I am glad I got to see.

At least the only people who abused me were white! And they called themselves Christian, but apparently if you support Israel you’re evil and aren’t allowed to call yourself Christian.

Just as well I didn’t carry my own signs.

I’ll be getting more pics from my mates, and posting those in the next few days.

Concerning the photo at the top of this post, Nilk has this to say:

As we can see, this sign was rather popular for the photographers. Child in hijab, mother in niqab. I spoke to a policeman about this sign, but by the time I got him here to show him, the sign had been damaged. He said the crowd wouldn’t support her message anyway, and I disagreed. No way a crowd shouting “allahu akhbar” is going to disagree with this woman.

Visit her photo spread for the rest.

4 thoughts on “World Zionism Takes a Beating in Melbournistan”